Shane Lowry: Time taken to take stock of a season of plenty 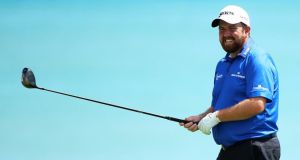 “I’ll be honest: wins are everything in golf. No-one plays to finish in the top-five, or to finish second or third. You would definitely swap a lot of good finishes for a win, so I think it has been a pretty successful year so far in that regards.” Photograph: Andrew Redington/Getty Images.

I’ve seen quite a bit of the Atlantic Ocean these past couple of weeks, whether it has been standing on sand banks off Portugal or looking out from Mizen Head into the wild waters off the west Cork coast. In a way, though, there’s no harm at all having time off. It is nice to get away, to relax and unwind, and to take stock of what way the season so far has worked out for me.

For the most part, I have achieved quite a lot of the targets I set out with at the start of the year. In fact, there’s hardly any better way to judge how well you’re doing than to listen to your own and being at Croke Park for last Sunday’s football semi-final was a case in point.

I’d got home from the PGA on the previous Monday – my mam and dad came up to see me in Dublin that evening – and I was gone on holidays to Portugal on Tuesday. We’d a lovely time. I got back home on Saturday night, which allowed me to get to Croke Park the next day, and, since then, we have spent the last few days driving around on holidays here in Ireland.

It was good to get to Croker too. I only got into the stadium half an hour before the throw-in for the Kerry-Tyrone match on Sunday, which is unusually late for me, but for a good reason. There was a lot of time spent being stopped to stand into photos and what have you. I’m getting used to being recognised but this was more than the normal – obviously after the win in Akron – and I must say it is really nice to feel that support coming from people.

My win in the WGC-Bridgestone Invitational was massive for me, opening so many new doors going forward and changing my career path, but I’ve done my best to keep the celebrations as low key as I could, not making too big a fuss of it.

I was having breakfast with Wendy the other morning and I said to her I almost feel guilty in not playing for five or six weeks at this time of the year. But there is not much I can do about it. I’m disappointed at not being in the Barclays for the start of the FedEx Cup this week but that’s the way it is, rules are rules, and I will be there next year.

There are a few tournaments in Europe at this time of the year but it kind of makes sense for me not to play, and to use the time in other ways. I’ll be out again for the Dunhill Links. So, it was nice to get holidays away in Portugal last week and at home this week. From next week, I will get stuck into it again with Robbie Cannon, my fitness expert, and my coach Neil Manchip and get ready for the rest of the season.

Looking back on the past number of months, the thing that actually stands out to me is missing the cut by just one shot in three of the Majors. I’m always fairly hard on myself, and that’s a statistic that’s hard to take. Especially The Open at St Andrews, because I felt I was playing quite well going there and felt I had a chance of doing well. To miss by a shot was disappointing. But, obviously, if I’d known what was around the corner, winning the Bridgestone, I don’t think I would have been too disappointed.

I’ll be honest: wins are everything in golf. No-one plays to finish in the top-five, or to finish second or third. You would definitely swap a lot of good finishes for a win, so I think it has been a pretty successful year so far in that regards. I’ve done pretty much everything I set out to achieve. My PGA Tour card. I’ve won another tournament. I’m well inside the world’s top-50. They were all my main goals.

So I’ve this time off for another few weeks and it is about trying to refocus and reset a few targets and using the time to get going for the rest of the season. As far as I’m concerned, it is important not to live off that Bridgestone win. It is important to kick on.

I’m looking forward to getting back to work with Neil. In mentioning him, it is worth congratulating him and the GUI on what is a brilliant achievement in Ireland getting five players onto the Walker Cup team for Lytham in a couple of weeks’ time.

I’ve got to know all five players. I’ve played a few rounds with Paul Dunne, played a round with Gary Hurley – who is friendly with my brother Alan – before I headed off to Akron and he went to the European Amateurs and I’ve met Jack Hume and Cormac Sharvin and Gavin Moynihan a few times.

Not sure if they’re all turning pro this year, after the Walker Cup, but they’re good players and quite capable of doing well. I hope they all do well in the Walker Cup and it’ll be interesting to see what they can do after that.