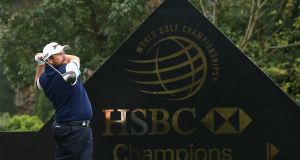 Shane Lowry hits his tee-shot on the first hole during the Pro Am event prior to the start of the WGC-HSBC Champions at the Sheshan Golf Club in Shanghai, China. Photo: Andrew Redington/Getty Images

Things move quickly on tour. Anyone who thinks we’ve time to sit around and celebrate a good finish on a Sunday evening would be wrong. For the most part, it’s all about moving on to the next stop.

Take last Sunday evening in Turkey: a decent final round for me, which brought a top-10 finish and further momentum up the Order of Merit rankings to third, had me feeling quite pleased with myself but with the main task of finishing my packing, lugging my luggage to the front of the hotel and hitting the road to Antalya airport.

One plane journey to Istanbul, a few hours wait in transit, and then the second leg of the trip had me arriving in Shanghai, in China, around 5pm on Monday evening.

I must admit I left Turkey with a degree of satisfaction, but also relief. Through three rounds I hadn’t played great. I found the game difficult, yet still wasn’t a million miles away from the leaders. I had battled hard. But I knew I had to find out why I wasn’t playing well. I felt my iron play was very hooky and my distance control wasn’t great and my ball flight was a bit lower than normal.

My caddie, Dermot Byrne, and myself went to the range after the third round. That’s where we dissect things. What went on? What happened?

We worked out that it was a simple thing, my ball was too far back in my stance. I just needed to push the ball well forward. It felt alien, a bit off. But when I moved it forward I was striking it better and I was even able to hit a few fades.

I don’t know what other lads do, but that’s how I go about it. Chatting with Dermo, working it out on the range. It probably took about half an hour to get the fix. It is one of those things that if I hadn’t found it on Saturday night I’d have had to go with a little hook again on Sunday.

Once I found it, the big thing for me was to go out in Sunday’s final round and commit to it as well. It felt strange, and especially over the tougher shots it can be hard to commit, but I did and I played lovely and shot 66. It was a good feeling, left me quite relieved and happy, and something positive to bring with me on my journey to China.

I got to Shanghai on Monday evening, got to the hotel, had something to eat and went to bed. On Tuesday, it was all about staying awake as long as you can to get over any jet lag. I played some holes, then took a taxi ride in the evening with Dermot into the city – an hour there, another hour back – but it was worth it because it is a great city with nice restaurants and a good atmosphere. Then, it was the pro-am on Wednesday.

This is a WGC event and I come in as the player who won the last WGC – the Bridgestone Invitational in Akron – and I was saying to Dermo coming off the course after Tuesday’s practice that it was nice to come here knowing I’ve won one of these WGCs before, and there’s only three guys here this week who can win two of them this year. Rory is one. Dustin Johnson the other. It would be very nice to get into contention and win it.

Now, it is back-to-back weeks in China before moving on to Dubai. I feel like I am coming in with a bit of form into this week and am looking to move forward. This is the second of the four “Final Series” tournaments in the Race to Dubai – I am currently third behind Rory and Danny Willett in that – and it also counts on the FedEx Cup on the PGA Tour. I like the course, it is one of the best we play on all year where you need to drive the ball well which should suit me.

I am comfortable in my surroundings and, with regards to the field, I am playing with Adam Scott and Louis Oosthuizen – two of the best players in the world – and that’s where I want to be and where I feel I deserve to be at the minute.