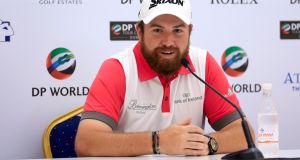 Shane Lowry speaking to the media during his press conference as a preview for the 2015 DP World Tour Championship at Jumeirah Golf Estates in Dubai, United Arab Emirates. Photo: David Cannon/Getty Images

Shane Lowry is “quietly confident” he can defy the odds and win the DP World Tour Championship and a first Race to Dubai title this week.

Lowry is one of seven players in contention to end the season as European number one, although the WGC-Bridgestone Invitational champion needs to finish second or better in Dubai to have a chance of overhauling Rory McIlroy.

The 28-year-old from Offaly has been frustrated by his putting in recent weeks but feels he will benefit from having his coach Neil Manchip on site for the €5.2million season finale at Jumeirah Golf Estates.

“I feel like I struggled in China,” said Lowry, who finished 68th in the HSBC Champions and 56th in the BMW Masters. “I played okay but struggled on the greens.

“But I played the pro-am here on Tuesday and I really felt like I was playing well. I’m quietly confident I’m playing well enough that if my putter warms up I can definitely give this a run at the weekend. Fingers crossed that happens.

“Putting has been the problem. It’s probably the reason I feel like I didn’t win at the British Masters as well [he finished second behind Matt Fitzpatrick at Woburn]. The last six weeks haven’t been great but I like it here. I think the greens are beautiful here and I made quite a few birdies in the pro-am.

“I’ve got my coach Neil here this week with me which is a big help and he always keeps me in a good frame of mind. I’m looking forward to it. I know what I need to do this week. I know I need to go and win the tournament. But that’s like no other week for me.

“I just need to go out there Thursday and Friday and try to put myself in a position going into the weekend. Hopefully I can make it as exciting as I can on Sunday.”

Lowry, who was fifth here 12 months ago, would love to complete a great week for Irish sport after Graeme McDowell’s victory on the PGA Tour on Monday and the Republic of Ireland qualifying for Euro 2016 the same evening.

“On Monday night I watched the game and was happy for the lads,” Lowry added. “I met up with Martin O’Neill and Roy Keane a couple of months ago just before they played Gibraltar and I had a great chat with them for a couple hours one evening. When you know people and you see them doing well, it makes it a whole lot sweeter.

“It’s great, everyone knows how Irish I am and how much I love my country, so to keep the celebrations going this Sunday would be nice.”