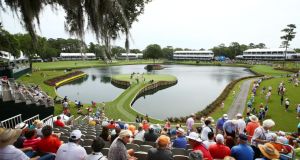 I’m getting used to stepping on to islands. Last week, it was Alcatraz – that infamous prison rock out in San Francisco Bay; and, this week, it is the 17th hole’s island green at TPC Sawgrass, where I’m back in action in The Players Championship, the flagship event on the PGA Tour.

To be honest, I think I have been hard done by of late. It started at the Masters, missing the cut by a shot. And it happened again in the WGC Cadillac Matchplay at Harding Park last week, failing to get to the knockout stage.

But I had to allow myself a wry grin at my sense of injustice when compared to what prisoners at Alcatraz had to put up with, where privileges were few and far between and where the right to basic food, clothing and shelter was all they could expect if they were lucky.

I’m not normally the type to indulge in touristy things, not when I’m playing tournaments. I did in San Francisco, though; I was with my uncle Martin, so enjoyed a few nice meals out, took in the Golden Gate Bridge and of course made the trip to The Rock where it really was fascinating to see the conditions in which prisoners lived and you put on the headphones going around the cells and you get to listen to their stories on the audio tour.

By stark contrast to the lives those guys endured, we enjoy a great life as professional players and week-in and week-out we are a pampered lot. We know that.

My own sense of being hard done by and on the receiving end of misfortune was mostly experienced in Thursday’s second group match. Once I saw the draw, I knew my group was going to be tough: G-Mac’s one of the best matchplayers in the world; Rickie Fowler is one of the top players in the world, and Harris English is obviously a good player as well.

One moment you’re thinking you’ve done enough to win and to move on out of the group, the next, less than 20 minutes later, you’re out of the championship and wondering what has happened. I was very, very disappointed. It’s hard to take. When you add that in with what happened at the Masters, it felt like golf hasn’t been giving me much back over the last month or so.

The great thing with golf is that there is always another week, another tournament. I flew from the west coast to the east coast, from California to Florida, on Sunday and the jet lag has lingered for the past couple of days. It hits in the mornings but it should be well out of my system for the tournament. I find that getting daily physio helps. Normally, Shane Lawlor, one of the best in the business, is out here on tour and I go to him. But he is not in Sawgrass this week. My body’s been a bit sore from the jet lag and tiredness and it needed a bit of a beating up.

I’ve gone instead to one of the South African guys who works on the PGA Tour. Getting physio is now a daily part of my routine, wherever I am. The strange thing is I am rarely hit by jet leg on those long trips to Asia but, here, it hits and I need it beaten out of my system.

I like Sawgrass. This is my first time playing in The Players. I played the course for the first time on Monday and played the back nine, purely because I wanted to see the 17th hole as quickly as I could. I was out on my own and when I got to the 17th I hit a nine-iron to six feet. Typical. You’re thinking, ‘there’s not much to this’, ‘why all the fuss?’.

But I know there is a lot more to it than meets the eye, especially when the green firms up and the wind is gusting and the area around the 17th is packed with spectators. A lot of players would very happily accept four pars over the four tournament days.

The course here has been made famous by the 17th but it is more than just about one hole, it is a proper golf course. It is tight too. I didn’t realise how tough it was going to be. I’ve prepared for the past two days playing rounds with Pádraig Harrington, picking into his experience.

Hopefully I’ll have a good week to finish my stint stateside before returning to Europe for Wentworth and then the Irish Open, which will be amazing.

This week, it is all about The Players. I was a little bit envious of Danny Willett pretty much securing his PGA Tour card with his good run in the Matchplay. But I’m not too far from wrapping that up myself. One decent week is all I need.