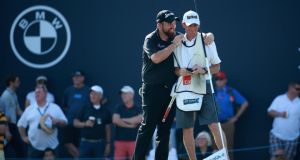 A relieved Shane Lowry embraces his caddie Dermot Byrne on the 18th green after the finishing his final round of the DP World Tour Championship at Jumeirah Golf Estates in Dubai, United Arab Emirates. Photograph: Warren Little/Getty Images 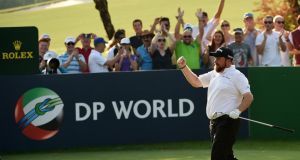 Shane Lowry celebrates his hole in one on the par three 13th during the second round of the DP World Tour Championship at the Jumeirah Golf Estates in Dubai, United Arab Emirates. Photograph: Ross Kinnaird/Getty Images

How do I explain this? The sense of relief I felt on that 18th green of the Jumeirah Golf Estates’ The Earth course in Dubai on Sunday was something new. It wasn’t like the euphoria I felt when I won the Irish Open or the Portugal Masters, my two wins on tour.

It was just pure relief; that finally I could breathe freely after weeks and months of putting pressure on myself.

I’m my own worst enemy when it comes to pressure and the expectations that I demand. I put more pressure on myself than anyone else does and that was so true of my bid to break into the world’s top-50.

I shot a 66 in the final round of the DP World Tour Championship on Sunday. I finished fifth. On my own. All the little pieces of my plan that were all over the place finally fell into place; and, to be honest, any time I look at the photo of me embracing my caddie Dermot on the final green, that feeling of relief returns.

It’s why I’ve been able to relax, to leave the clubs untouched for the past few days, why belly-flopping into the sea on my few days off here in Dubai is like being in another world.

The difference to how I played in that final round on Sunday actually came from a no-holds-barred, honest talk I had with my coach Neil Manchip after my third round on Saturday evening. I’d shot a level-par 72 which was like falling backwards on a day of good scoring. I wasn’t happy with myself or my score and went to the range afterwards. It was dark when I finished up. I was the last player there.

On getting back to the locker-room, it was quiet. It was empty. Just myself and my coach. He picked his time well to sit me down and have a heart-to-heart talk. It was honest, no holding back, just the two of us.

“What is it you actually really want to get out of making the top 50 in the world?” Neil asked me at one point. He knew what pressure I had been putting myself under. “I just want to play in the Masters, but not only play, I want to compete,” I told him. It was like someone released a valve, and from there on our conversation was full and frank.

Talking to Neil, I got everything out in the open. I walked out to the first tee on Sunday and I was like a different person. I didn’t deal with it very well up to then, but I dealt with it well on Sunday.

In looking at the bigger picture, I didn’t want a position of starting up again in 2015 in Abu Dhabi with the whole top-50 thing still an issue. I didn’t want a situation of going into another year lying in 52nd or 53rd or wherever and all the talk very day of being of trying to get into that top-50. Stress. I didn’t want it on my mind.

Neil knew and I knew the pressure I had put myself under in the past few weeks and our talk, which lasted for about 15 minutes or maybe a little longer, cleared the air. When I went out for the final round on Sunday, I was like a difference person. I was able to play more freely, had a much better flow to my game.

For much of the day, apart from a couple of tee shots, I played flawless golf. My iron play all week was good enough to win the tournament and the only disappointment I felt on Sunday evening was that I hadn’t actually won.

Yeah, I got a bit of luck on the 18th when my tee shot bounced on further up the fairway after hitting a rock in the hazard. I felt I deserved that bit of luck.

I missed six or seven cuts by a shot at the start of the year and got a couple of draws in some of the bigger events that didn’t go my way. But you also have things that go your way and that stroke of luck on the 18th just happened to come on the last hole of the season. You take your good breaks and your bad breaks and thankfully that was one of my good ones.

But the way things were going for me, I was happy enough to get the two-under for the shot which probably worked out better for me. If I’d finished two shots worse off at the end of the tournament, I’d have been worth a lot less.

I have finally broken into the world’s top-50 and, barring an unlikely sequence of events, look virtually certain to get the invite into the Masters which was a real target of mine. I got lots of messages offering congratulations, which was nice. It was a bit of a milestone. But as I told my family and friends, this is only the start of what I want to achieve.

One of the nicest texts I got was from my sister, with a photo of my nephew Cian wearing a tee-shirt saying I was awesome. I have to admit, it’s cool when you get stuff like that after doing well. It puts a big smile on your face. It makes me feel proud, to represent not only my country but my family more than anything else.

I’m here in Dubai for the rest of the week, relaxing and having some downtime. It’s been a long season and a long closing four weeks, in different time zones and different countries, and a lot of stress right down to the final round of the season. But looking back now it ended up being a good run of tournaments and I am looking forward to next week’s tournament, the Nedbank Challenge, in Sun City, which is the first event on the 2015 European Tour. My brother Alan is coming down with me, so that should be good.

I never really go to tournaments thinking about winning. But I feel I can go down there and compete and get a win. It’s the only thing from this year that has been missing. It would top off the year superbly and kickstart my 2015 campaign as well . . . onwards and upwards!!