Shane Lowry: Playing with AP a nice start to one of my favourite weeks 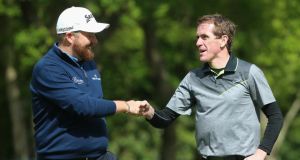 It’s not every day that you get to play in a pro-am with three sporting legends and I thoroughly enjoyed my time on the golf course yesterday with AP McCoy, Mick Fitzgerald and Carl Llewellyn. As jockeys, they were out of their comfort zone, on my turf, but they are professional sportsmen who have all achieved a lot and I find you can always pick up things when you’re in such company. You’re always listening to their stories, learning from their attitude.

I’d met AP before and, although I’m not a big gambler, I’ve definitely backed him in my time. We’d a great laugh going around, chatting about what they do and have done, talking of their Grand National wins and other things, and we actually played some decent golf. In fact, we were 17-under as a team, went down to the BMW hospitality in the tented village expecting to collect a prize for our third-place finish. There was a mix-up somewhere along the line because our names weren’t called out and we never got to collect. I wasn’t impressed; it would have been nice for the lads to get their due reward.

I love Wentworth. I never knew the old course and I think that is actually a good thing. I played here for the first time in 2010 – the first year of the changes made by Ernie Els – and a lot of players were whinging and moaning and bitching about it, saying it was too tough. I just got on with things, made the cut that year, and have enjoyed returning year-on-year and doing quite well. I’ve a tied-fourth finish in 2011, a runner-up finish last year. I love it here.

It’s always good to come back to somewhere you have done well in the past. Obviously I’ve got some good vibes from finishing second to Rory last year and when I was playing the course on Tuesday a lot of the shots I hit in that final round came back to me. You take those vibes, but it is also important not to dwell on them too much. This is a new week, a new tournament. You let your mind think about what you’ve done but you also must focus on the shots ahead of you.

There was a big scoreboard there and I saw I was leading the tournament. I was prepared for it. I took it in my stride. I probably could have won. I know I didn’t but I still felt I gave a good account of myself on the day. Shooting 68 in the final round around here is always good. Unfortunately, I came up one shot short.

I’ve always liked the BMW PGA because it is a big tournament. I’ve always enjoyed the week, from the crowds on pro-am day and right the way through. You don’t have this kind of atmosphere in Europe much and it is nice to have it here. It is a big tournament and if you can go and have a top-10 or a top-five it really moves you up the Race to Dubai standings. My golf – in tournaments – hasn’t been going great of late and I was disappointed to miss the cut in The Players. I have been getting knocked back a little on the course.

The game hasn’t been very kind to me but I just have to keep plugging away. I was in a lot worse position this time last year. I just want to try and have a decent week here.

This is not a bomber’s course. I know Rory won here last year but he is capable of winning on any course. Around here, you need your all-round game. Your iron play needs to be good into the greens. You need to have distance control spot on. You also need a good short game. If you miss the greens, it is tricky. I like this type of golf. You need to position the ball off the tee, you need to plot their way around. Some people don’t like that; some do. It is the way it is.

This is obviously a big week for all European Tour players – it is our flagship tournament – and it is a big two weeks for Irish players, with the Irish Open coming up next week.

I’m looking forward to playing at Royal County Down, obviously, but, for the next few days, it is about focusing only on Wentworth. I’m playing with Pádraig Harrington and hopefully his injury clears up.

Hopefully, too, I can use this week to jump-start my season.