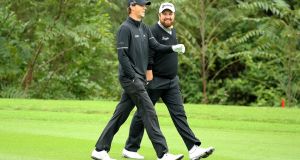 Let me explain why I’m not playing in Turkey this week. Yes, I had entered. My plan throughout the year was to be in the field for the Turkish Airlines Open and to give it one big push to get something out of the season and move onwards to Dubai. But the best laid plans and all of that.

All those plans changed in China last week. I was playing in the WGC-HSBC championship in Shanghai and, in the days running up to the tournament, there were all sorts of stories doing the rounds. Honestly, it was a bit like playing “Chinese Whispers”. You didn’t know what to believe.

The impression I had on Wednesday of last week, the eve of the WGC, was that the tournament in Turkey would be cancelled. I wasn’t the only one who believed it was about to be struck off the schedule due to the security concerns there. I know everyone’s going to say how good it was in Turkey and how nice the place is but there were times last week we simply didn’t know what was going to happen – and that is a situation that doesn’t suit me at all.

Once I’d made the decision, I felt better.

My performance in the WGC was typical in many ways of how my season has gone. There were lots of good things that happened, a 68 in the second round and then a 65 in the third round on Saturday. And there wasn’t much that was bad with how I played. But the bad was enough to be quite costly in the final round and those few holes did me. By the time I’d signed my card, I was glad that I’d made that decision to fly home.

I never even thought of adding the Nedbank next week onto my schedule. For me, I’ve now got two tournaments left to play out the year: the DP World Tour Championship in Dubai in a fortnight and then the World Cup with Graeme McDowell in Australia the following week. I want to go and play well in Dubai but I’d really like to contend in the World Cup and believe myself and Graeme can. That’s my main aim for the rest of the year. I’m almost going to be using Dubai as a warm-up.

And I am at least in the position of not having to look over my shoulders in the world rankings, because my runner-up finish in the US Open means I am already in the field for the Masters next year.

If I’m truthful, the way the season has gone I will be happy to see the back of it and move on to 2017 . . . that is, unless something special happens the next two weeks and turns it into a great season. That’s the way golf is. If I win in Dubai or end up winning the World Cup with G-Mac, it ends up being a great season. IF!!!

Mason Jones not interested in being the Welsh Conor McGregor 12:01
Charles Byrnes’ licence withdrawn after runner ‘nobbled’ with a sedative 11:38
JP McManus Pro-Am deferred for a year due to Covid 10:45
James Harden stars as Brooklyn Nets edge Bucks in thriller 09:17
Spanish player says Australian Open quarantine is like prison 09:06
Here is your handy guide to sport on television this week