Shane Lowry: I’m striking well - if I can just warm up the putter

I’ll be honest, the past two weeks in China were very disappointing and I need to improve 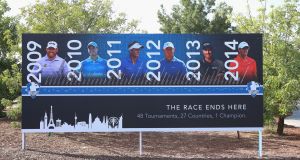 A sign showing previous winners of the Race To Dubai before the start of play at Jumeirah Golf Estates, Dubai. Photograph: Andrew Redington/Getty Images

I had a good laugh and some nice banter playing in the pro-am on the Earth Course in Dubai on Tuesday which, after the two weeks of disappointing play in China, was a bit overdue.

I was with my caddie Dermot Byrne and coach Neil Manchip on the 18th hole where the stream snakes it way up the fairway and we were trying to pick out the exact rock in the hazard that my ball had ricocheted off during last year’s final round of the DP World Tour Championship.

We’re sure we found the friendly rock that kicked the ball back onto the fairway – not that I want any further favours from it this week. Hopefully I stay on the straight and narrow this time.

I’m not one to sit down and look back on things – at least not until the end of the year when I’m not playing golf and have some time for reflection – but what I can bring with me into this week from my situation a year is that I was playing under a bit of pressure – to make those goals – and had a decent tournament.

It gives you an extra bit of confidence coming back to places where you’ve done well under pressure before.

This is my fourth straight week on tour and, I’ll be honest, the past two weeks in China were very disappointing.

I’d gone to Shanghai on the back of 11 straight sub-par rounds but took 37 putts in the first round of the HSBC and, walking off the course, I gave my putter away to a young boy.

I was very frustrated and it was one of those things where it was never going to see my golf bag again. So, giving it away made the boy’s day. He was very happy and came up to me the next day and got a photograph taken with me.

I only had two putters with me in China. I don’t normally travel with many. But the one that went back into my bag – and will stay for some time – is an Odyssey two-ball putter I have had for five years and which I keep going back to. I’ll be sticking with it for a while.

It’s the old story: if I can just warm up the putter! It’s about starting to hole some putts.

Myself and Dermot were talking about it after we finished in China, and I told him I was looking forward to seeing Neil once we got to Dubai. He usually gets me in a good frame of mind – that’s the way I was looking at it – and, sure enough, I’ve felt better since meeting up with him.

Neil is my coach but he also gives me guidance. I took a day off on Monday, just chilled by the pool , and went out in Tuesday’s pro-am and played nicely. I actually holed some putts! So I’m quite excited about this week.

I’ve put a lot of focus on my putting for the past three weeks and it was getting to me. Talking with Neil has me focusing more on the positives and there are plenty of those. As regards my putting, as he told me, it is not as if I have been putting badly for months. I just needed to put it behind me, to get it out of my head.

It’s not my stroke or anything, it’s more mentally I haven’t been great. I was tentative and had lost confidence. It was nothing to do with my actual stroke. It was more between my ears if I’m honest.

If I don’t win the Race to Dubai it won’t be the end of the world. If I do win it would be amazing. And it is great to have that chance to win the order of merit. Just like any other week, my aim is to go out and shoot a couple of good scores and to give myself a chance come the weekend.

I suppose I’m just trying to look at the positives because I’m still playing well. I’m hitting the ball really well, in the prom on Tuesday, in my nine holes practice on Wednesday. If I can just warm the putter up, if I start holing a few putts, you never know what could happen this weekend.

I’m putting the past few weeks behind me. It just so happened I didn’t putt well and I’m just trying to look forward to this week, another big week.