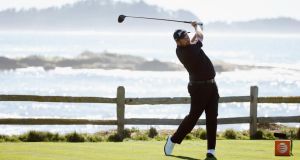 Shane Lowry: “I’ve only played two tournaments so far this season, played quite well and hopefully I can keep doing it next week in the WGC-Cadillac championship in Doral.” Photograph Scott Halleran/Getty Images

I could give you a million guesses as to where I was on a wet, gloomy day in Dublin on Tuesday last and I don’t think anyone would come up with the right answer. A hint: my heart was thumping and I was pumping sweat, which I imagine is the sort of thing anyone would experience coming down the final stretch of a Major championship when in contention.

No, I wasn’t on the range belting balls.

No, I wasn’t practising my bunker play.

No, I wasn’t rolling putt after putt. To be honest, the weather has been so bad at home since returning from the Pebble Beach Pro-Am that my clubs have been used about as much as a fly-swatter in winter.

Don’t all faint at once! I was in Morton Stadium in Santry sprinting and working out under the expert tuition of Robbie Cannon, an old friend from my amateur days, a fine golfer in his own right but now working with me professionally on strength and conditioning. I started working with Robbie in the last week of January and have seen him every morning for workouts since getting back home from Pebble Beach. Tuesday was just another of those lung-bursting days.

Those back-to-back weeks playing on sponsors’ invites on the PGA Tour went well, I felt. A tied-seventh finish in the Farmers Insurance Open at Torrey Pines followed by a top-25 at Pebble Beach.

Actually, I was a bit disappointed with the finish in Pebble Beach as I was in a decent position going into the final round. I had played lovely golf for the first three days, just two bogeys in three rounds, but the Sunday at Pebble was just one of those days. I knew I needed to shoot a good score to hold my position or to move up the leaderboard but I made three sloppy bogeys with a wedge in my hand on the back nine: from just 86 yards on the 11th, from 135 on the 15th and from 123 on the 16th.

I talked about with my caddie Dermot (Byrne) afterwards and we felt my poor finish probably had to do with playing 13 rounds in 14 days which is pretty intense, especially when so many are competitive rounds. I was mentally tired. I’m not making excuses, these things happen but it was still another decent cheque towards getting my PGA Tour card.

I’m comfortable and confident with what I am doing. I was home with the folks in Clara the other evening and I was saying to my dad that, even before Torrey Pines, having not lifted a club for five or six weeks around Christmas and delaying my start to the season until that event in San Diego, it felt like I had never left a club down. Some people might have criticised me for not playing in January, in the Middle East, but I was happy with the work I did and it paid off. I proved myself right, that the time off was well worth it.

The thing is, I’ve set out my schedule and I believe it is one that suits me. A lot about golf is do with backing yourself to play well when you do play. It is better to play fewer events and to back yourself to play well when you have a card in your hand. That’s what I am doing. I’ve only played two tournaments so far this season, played quite well and hopefully I can keep doing it next week in the WGC-Cadillac championship in Doral.

The weather was so bad after I got home from Pebble that my workouts with Robbie – I think I saw him every day bar one – took over from actually hitting balls. But I am heading over to Florida early, staying with the real Stevie-G for a couple of days. Stephen Grant is a very good friend of mine, a former professional soccer player-turned-golf professional and I will get to play a few rounds with him, which will be great practice in good weather, before turning up at Doral.