There is a win not too far away. I just need to keep doing what I am doing 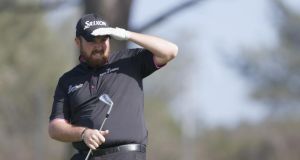 It’s great to be back on the road again, even if the feel-good factor of a seventh place finish in the Farmers Insurance Open at Torrey Pines didn’t last as long on Sunday as you’d expect.

In effect, I was brought back to earth with something of a thud. The journey from San Diego to Pebble Beach is a long one, almost 450 miles, and the GPS in our hire car let us know it would take the guts of seven and a half hours, taking us through the City of Angels. Except, it hadn’t factored in the drama of a mid-route collision into the equation!

Myself and my caddie Dermot Byrne – he was driving – were stuck in traffic in Los Angeles, just over two hours into our road trip, chatting away, when, BOOM!, someone ran into the back of us.

The fella hit us pretty hard and, looking at the extent of the damage to the rear of the car, we were both lucky not to get any injury or any kind of tweak from the collision.

It was, though, a shock to the system and it added almost an hour onto our journey as we had to move to the side of the road to sort out all the relevant details.

It was some way, memorable for all the wrong reasons, to finish off what had been a really good day.

I loved the tournament in Torrey Pines. It was a great start back to playing tournament golf, and great – and a bit of a relief – to know that my plan to take such a long break over the winter had worked out as well as I could have envisaged. I know some people were wondering, ‘What’s he doing taking almost 10 weeks off?’ or, ‘Why isn’t he playing in the desert?’”

But I knew what I was about.

But, in the weeks leading up to Torrey Pines, I actually got back playing a lot of golf. I had five days with friends in PGA Catalunya in Spain and then had a week’s practice in perfect weather in Orlando – where Dermot was with me – which set me up nicely for my first tournament of the year in San Diego.

My target wasn’t too lofty: just to make the cut and get into the weekend. I did that, and then kicked on. In my own mind, I expected to do well. I was confident coming off the back of last year’s campaign. And I had been playing okay in practice. Still, if someone had offered me a seventh place finish in my first tournament back, I’d have snapped their hand off.

The Farmers Insurance Open was the first sponsor’s invite I managed to get to play on the PGA Tour and so we had it earmarked from a long way back as the start of my season. I flew in from Orlando on the Sunday and loved Torrey Pines from the moment I set eyes on it.

One of the conditions of getting an invite is that you have to play a Monday pro-am but it worked out well and gave me a great opportunity to experience the South Course. Dermot actually got to San Diego ahead of me and had walked both the North and South Courses which proved to be a very sensible move, as fog restricted us to nine holes on the North ahead of the tournament.

Compared to my first experience of playing in America a few years ago, I am much more at ease nowadays. I can go into a locker room or the players’ lounge and I know players and I suppose that comes from having played in a number of Majors in the US. It’s still a bit different from Europe, where you know everyone, but it’s also great to meet new people and to get to know them.

I’d never met, or to be honest, even heard of Carlos Ortiz and Andrew Svoboda, my playing partners for the first two rounds. But you learn stuff about each other and really just stick the head down and keep going and focus on the round.

I had a figure in my head, to get to 10-under or 9-under. A bad finish on Saturday is what killed me but I went for it coming in on Sunday in the final round. No matter how hard a course is, you can still have four or five birdies in a row and that’s the way I was thinking.

I was chasing an eagle on the 18th but my approach from 230 yards finished up in a bunker, although I managed to get up and down which was some consolation. I knew, though, I was going to be one or two short and in the end I finished two strokes out of that play-off won by Jason Day. I’d hit the road by the time the play-off got under way.

But I took a lot of positives away from Torrey Pines, and not even that collision in LA on Sunday evening took any of the gloss away. These days, I know coming into a field I am one of the best players and could have a chance to win on any given Sunday. You have to be confident with what you are doing.

Our road trip from La Jolla to Pebble Beach was delayed by the accident and, after we got going again, we decided to stop a couple of hours drive short of Pebble Beach to spend the night in a hotel and complete the journey on Monday.

It was a wise move. It’s my first time in the Monterey Peninsula area and I love it.

I’m with Dermot Desmond in the team and we’re grouped with Pádraig Harrington and JP McManus for the first three days.

As far as securing my PGA Tour card, I’ve made a good start.

The cheque from Torrey Pines is a decent amount but I want to just focus on my golf. I’m up to 40th in the world ranking and if I continue to move up then everything else takes care of itself. I know there is more in me.

I know there is a win not too far away. I just need to keep doing what I am doing and hopefully the rewards will come sooner rather than later.