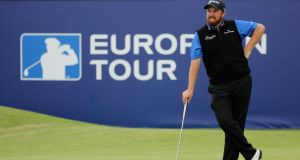 Shane Lowry of Ireland waits on the 18th green during the second round of the Aberdeen Asset Management Scottish Open at Gullane Golf Club. Photograph: Mike Ehrmann/Getty Images

Shane Lowry believes stability in his life off the course is helping his game on it after the Irishman shot a second 66 to move to eight under and a tie for second spot at the Scottish Open at Gullane.

The 28-year-old kept up his excellent recent form with five birdies and just a single bogey on the 15th, his only dropped shot in 36 holes.

It left Lowry in a six-way tie for second place, three shots off England’s Daniel Brooks, who added a 65 to his open 64 to move to 11 under.

Lowry will tee it up with former US Open winner and defending champion Justin Rose in the third round after the English star also put together a second 66 over the composite links course to the east of Edinburgh.

Lowry, who was in contention for the US Open last month before finishing ninth, credited his recent good form to a settled home life.

“I’ve settled down a lot and matured a lot,” said Lowry. “Everything in my life is a lot more stable and my golf is reaping the benefits.

“I’ve always had belief in myself. No matter what tournament I play I feel like I can do well and compete. Whether it’s a normal tournament or a Major, I just want to play well.

“I think a lot of people have been caught up in recent weeks about me winning Majors; I think I’ve got a lot to achieve before I win a Major. If one gets in the way between now and then, I’ll take it happily. That’s the way I feel my career is going.”

Graeme McDowell already has a US Open in the bag and he continued his fine performance by being the third player to card matching 66s over the opening two rounds.

The Portrush golfer included two bogeys in the middle of his round, but a fine finish that saw him card three birdies in the final five holes to also make it to eight under.

Rose rated his game at just 50 per cent despite remaining firmly in contention to defend his title come Sunday.

Looking to become the first player to win the event two years running following his victory at Royal Aberdeen 12 months ago, Rose recovered from a bogey on the first with five birdies in the next seven holes, but could only manage nine straight pars on the back nine.

The closing stretch was not without incident however, with Rose’s tee shot on the 16th hitting an elderly spectator on the head and causing a teenage fan to faint at the sight of the resulting blood.

“You can’t quite see where the spectator line is on that hole and when I saw the ball bounce up I was hoping it had maybe hit one of the white stakes,” Rose said. “Whenever you see the ball jump into the air, it’s not hitting anywhere soft.

“I was pretty concerned walking up there. There didn’t seem to be a commotion, but then I saw someone was on the ground. You hope it’s not a kid, you hope it’s not a woman; obviously it was an elderly gentleman, but he took it like a trooper and was talking to me so that was slightly reassuring.

“He told me had been coming to tournaments for years and years and had never got hit before.”

Speaking about his round, Rose said his game was “running at 50 per cent”, adding: “There are still a couple of loose shots that I am getting away with on this course that I wouldn’t on other courses.

“But I feel like I have managed my game well, played the hard holes well and kept it clean.”

Playing partner Phil Mickelson, who won the 2013 British Open a mile down the road at Muirfield, was in danger of missing the halfway cut when he bogeyed the 11th and 12th, but responded in style with a hat-trick of birdies from the 14th to finish three under.

“For me to make the cut the way I putted the first two days is surprising,” the 45-year-old said. “I feel really good about some of the things I’ve been working on in my golf swing. The last piece will be the putter. I don’t want to worry about that right now.”

Brooks, who fired four birdies and an eagle in his 65, won the Madeira Islands Open in 2014, an event reduced to 36 holes due to bad weather delays and overshadowed by the death of Alastair Forsyth’s caddie Iain McGregor on the course during the final round.

“I’ve played some terrible golf since then but it’s started to come back,” said Brooks, who had missed 13 cuts in a row this season before finishing 20th in France last week. “To miss that many cuts, it does get you down. But you only need one good week.

“Madeira feels like a long time ago now. With Mac passing away, I didn’t have time to celebrate, it wasn’t a nice feeling. I got a win but it put a downer on it.”

First round leader Thorbjorn Olesen amazingly missed the halfway cut after slumping to a 77 on Friday, 14 shots worse than his opening 63.

Michael Hoey had six birdies and a bogey in a 65 that moved him to five under, while Pádraig Harrington’s 68 got him in to the weekend on four under.

A bogey on the 18th saw Damien McGrane miss the cut by a shot after a 70 left him on one under while Paul McGinley will be back behind the microphone at the weekend after a 71 left him on seven over.

5 Courage of an honest athlete

France yet to receive approval to travel to Ireland for Six Nations clash 01:00
Johnny Sexton sees Tom Brady’s lengthy NFL career as inspiring 01:00
GAA set to extend ban on intercounty activity until March 22:40
Man United stunned as Oliver Burke wins it for Sheffield United 22:31
Rangers move closer to the title as Celtic get back on track 22:02
Here is your handy guide to sport on television this week