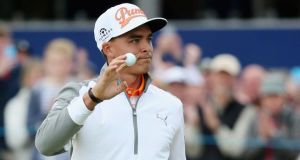 No victory for either of them, but no regret either. In truth, although reduced from principal characters to minor roles in the drama which yesterday unfolded in the final round of the Scottish Open, Shane Lowry and Graeme McDowell departed for a bigger stage.

Each shared a sense of anticipation on their road trips around the Firth of Forth, for dates with destiny further up the coast.

The 120km journey around the estuary to St Andrews offered hope of greater rewards for the two Irishmen who had flirted with contention here . . . but especially so for Rickie Fowler, who carded three birdies in his closing four holes for a finishing 68 for a 12-under-par total of 268.

But even the vanquished got the positive vibes.

Knocking on the door

“I feel I was knocking on the door again,” said Lowry, as upbeat as someone who had finished in tied-31st could be.

“I feel the juices flowing a little bit again . . . this course was a great limber up [for the British Open],” said McDowell, reflecting the view that, after a difficult season, he has finally found light at the end of the tunnel. He, too, finished in tied-31st.

Their comments defied the fact that they had finished seven shots adrift of Fowler and revealed the belief that these past four days on the links of Gullane had more than prepared them for the upcoming 144th edition of the Open championship on the famed Old Course.

For sure, the exposure to competitive links golf had been a tonic, of sharpening minds and honing their games going into the season’s third Major.

Lowry, despite slipping down the leaderboard over the weekend, had gone out in the final round intending to make a charge.

It never happened, any chance of a late surge blocked by back-to-back bogeys on the 13th and 14th coming in. Even so, there was a sense that his game is in good shape.

Coming down the last, he had a brief chat with his caddie Dermot Byrne.

“Just keep knocking on that door and, eventually, hopefully, I will make three or four birdies in a row and all of a sudden I will be standing on the 18th green a happy man,” revealed Lowry.

Of the challenge at St Andrews, he added: “I don’t think patience is the key in St Andrews, scoring is going [to be good]; so if you go out with the mentality of being patient, all of a sudden you find yourself level-par through 15 and the leader is five- or six-under. You need to be cautiously aggressive . . . and I know the course well enough, I know how to play it.”

McDowell, too, left Gullane for St Andrews with some of his old verve. “It’s the best I played this year, on Thursday and Friday. You amble to the next shot when you’re not sure where it’s going to go; when you feel like you’re controlling the ball, you’re in a rush to get there.

“All in all, I’m happy with the direction I’m moving. We’ve got no shortage of good golf coming up. It’s time to stay patient and let good results get in the way,” he said.

Pádraig Harrington hit a roadbump on his way home – a run of bogey-double bogey (with a lost ball)-bogey – resulting in a 72 for 278, tied-62nd.

“I played very nicely the first couple of days but didn’t really hit my short irons close. I didn’t really do that all week to be honest. Going into next week there’s a lot of short irons you want to hit close,” he said.