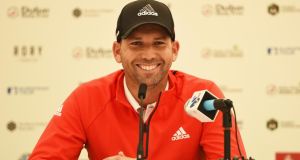 Sergio Garcia of Spain answers questions from the media during the Pro-Am round prior to the Irish Open at Royal County Down Golf Club. Photo: Ross Kinnaird/Getty Images

The Irish Open holds a particularly special place for Sergio Garcia. The Spaniard won his first European Tour event in the Irish Open at Druid’s Glen, county Wicklow in 1999 and hopes to add this year’s tournament to his growing list.

Garcia’s highest placing this year was tied second with American Kevin Kisner at the Players Championship earlier this month but hopes that his history here and parental advice from his father can pay off over four days in the county Down dunes.

“Obviously my first victory on the European Tour, first victory as a Pro, Yeah, ‘99 great memories,” said Garcia. “I’m excited about this week. The Irish Open is always going to hold a special place in my heart. Obviously it’s a big tournament, a lot of players. Great course.”

Garcia took some course intelligence from his father Victor, who played at Royal County Down as a professional on the Senior Tour.

“He played, I think one or two British Senior Opens here. Obviously told me it was a great golf course, had to hit the ball well. Tough golf course. So I’m excited to take a good look and be ready for tomorrow.”

The 35-year-old also said it would be mentally hard for Rory McIlroy, who is hosting the event and missed the weekend cut at last week’s PGA event at Wentworth. The world number one has scheduled himself to play five tournaments in succession.

Striking a note of caution aimed at McIlroy, Garcia added that long stretches of playing competitively without a break can take its toll. The Spaniard competed in the Spanish Open, which he has always supported and then took part in two more events in the US. That run was to too much for him to also play in last week’s BMW PGA Championship.

“You can also talk a little bit about Rory,” said Garcia. “Three big weeks in the US and then comes back and it’s tough. I felt it at The Spanish Open, that I was starting to lack a little bit of energy. The battery was low. It was staring to give me signs.

“At the end of the day I think the most important thing for us is to as well prepared as possible coming into a tournament and even if it’s a big tournament, coming off a big run you can be a little lacking that extra energy that you need and you don’t play the way you want to and then obviously you are not as happy as you want to be.”

1 Ronan O’Gara: Ireland need to be braver than usual ‘in a shoot-out for gold’
2 Jackie Tyrrell: We’ve got the championship back. But where’s the physicality?
3 America at Large: Golfers guilty of legitimising Trump’s toxic regime
4 Ireland can treat fans to some tricks on Halloween night in Paris
5 TV View: Arteta played the Done Deal ads but this wasn’t Goliath’s off day
Real news has value SUBSCRIBE

Jones says Barbarians fiasco made rugby a ‘laughing stock’ 07:29
Arsenal put three past Dundalk in comfortable win; O’Gara expecting shootout in Paris 07:12
Ireland can treat fans to some tricks on Halloween night in Paris 07:54
Louth starting afresh 10 years on from Leinster heartbreak 07:31
Jackie Tyrrell: We’ve got the championship back. But where’s the physicality? 06:00
Here is your handy guide to sport on television this week