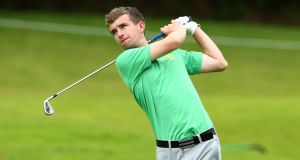 Seán Flanagan claimed the silver medal for leading qualifier at the West of Ireland Amateur Open at Co Sligo after the second round of strokeplay was abandoned because of high winds. Photograph: Cathal Noonan/Inpho

There was anger and frustration from many players at venerable County Sligo Golf Club when high winds forced officials to abandon the second round of strokeplay qualifying for the West of Ireland Amateur Open.

Rather than resume play on Sunday after the afternoon wave of 66 were unable to play on as winds gusting up to 47 miles per hour made the course unplayable, the Championship Committee opted to scrap all second rounds scores completely.

As a result, Friday’s leading 64 first-round scores were declared as the qualifiers for Sunday’s first round of matchplay combat with a two-over 73 by Co Sligo’s Seán Flanagan giving him the silver medal awarded to the leading qualifier for the second year running.

Those who had played in the tougher afternoon conditions on day one felt they had been done a disservice, while those who were going well in the afternoon wave in round two were also peeved.

The matchplay draw shows that just 19 of the 64 qualfiers came through from the tougher Friday afternoon conditions.

“Terrible decision,” lamented Co Sligo’s Gary McDermott, who had followed a windblown, Friday afternoon 84 with a Saturday morning 77 to be in with a chance of making a 36-hole cut had the afternoon play been continued.

He felt play should have been resumed on Sunday morning in the interest of fairness to both sides of the draw but with officials fearing mass no-shows by extending into Sunday morning, a drastic decision was taken.

Joe Lyons, the 2007 champion, disagreed with those who felt a tough course set was to blame for the balls moving on greens and the slow rate of play.

“This afternoon wouldn’t have been playable no matter where the flags were,” Lyons said. “In 2007 I shot 80-66 in the Brabazon Trophy. Half an hour after I shot 66, round two was abandoned. That’s the way it goes sometimes.”

Caddie Jude O’Reilly, who has worked for Christy O’Connor Jnr, Shigeki Maruyama and Henrik Stenson, found conditions extreme as he caddied for The Island’s Kevin LeBlanc, tweeting on the initial suspension of play: “I didn’t caddy in The West before ’78 . . . so based on my limited experience this is RIDICULOUS.”

Championship committee chairman Jim McGovern explained: “The situation was that there could be no more play this evening as the forecast was for no let up until after 8 o’clock. The agreement was that this was the best idea.”

Conveniently for the organisers, exactly 64 players had taken 82 blows or better, saving them from implementing a new condition of competition that required playoffs in the event of ties rather than the traditional count-back method.

Winds had also gusted up to 48mph on Friday though balls did not move to the same extent as in round two, when players were delayed by up to 10 minutes on exposed greens because the ball would not sit still.

“I had a five-iron into the 12th from 80 yards,” said Royal Dublin’s Richard Knightly, who then three-putted the exposed par five for a quadruple bogey nine. “It was crazy stuff.”

(Round two abandoned due to high winds)