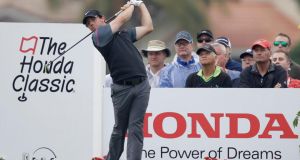 World number one Rory McIlroy drives off at the 16th during the second round at the PGA National’s Champions Course in Palm Beach Gardens, Florida. Photograph: Luis M Alvarez/AP

If Rory McIlroy proved one thing at the weather-interrupted Honda Classic at PGA National in Florida, it is that he is only human. The world number one’s seasonal debut on the US Tour was as anti-climatic as they come, as he bogeyed three of the closing four holes of a second round 74 for 147, seven-over par, that saw him miss a cut on American soil for the first time in almost three years.

On a stop-start day that had two suspensions in play due to inclement weather, US Ryder Cup player Patrick Reed defied conditions with back-to-back 67s for 134, six under, to move into the clubhouse lead. His form was in marked contrast to that of McIlroy, who struggled with most facets of his game.

McIlroy, making his first appearance of the season on the PGA Tour, started with a bogey on the 10th, his opening hole, and was called in twice due to weather delays on the front nine. His search to find any momentum proved beyond him, as he reached the turn with another bogey on the ninth hole.

And, after hitting a superb tee shot to three feet on the 217-yard Par 3 fifth to set up his only birdie, the revival proved short-lived as he bogeyed the sixth, seventh and ninth to miss out on a cut which will only be determined Saturday when the full field completes the second round. McIlroy, though, is too far adrift and will have a weekend at his nearby home before moving on to the WGC-Cadillac championship in Doral next week.

McIlroy’s finish typified his lack of sharpness, as he found bunkers on the sixth and seventh and ninth. With 149 yards to the flag, McIlroy found the front of the green and then three-putted for a bogey.

It marked McIlroy’s first missed cut in an official PGA Tour event since the 2013 British Open and his first in America since the 2012 US Open. He also missed the weekend in the Honda Classic in 2013, after withdrawing with toothache. His last missed cut on the European Tour came in last season’s Irish Open at Fota Island.

McIlroy hasn’t played competitively since winning the Dubai Desert Classic on the European Tour but had finished in the top-two in his last six tournaments up to Dubai.

In contrast to McIlroy’s woes, Brooks Koepka, playing in the same three-ball, showed him the way with a brilliant 64 that improved on his first round score by 14 strokes which ensured the American – who had a breakthrough win on the PGA Tour in the Phoenix Open – survived into the weekend where he will chase down the impressive Reed.

Reed started par-double bogey in his second round but steadied matters from there on and played the following 16 holes in a bogey-free five-under, to claim the 36-hole clubhouse lead, with the second round incomplete as fading light affected the second wave of players who must complete their rounds on Saturday.

In his first two rounds, Reed defied the tough conditions to post 12 birdies – despite finding only two-thirds of greens in regulation.