Rory McIlroy continues to dazzle as he leads in Dubai 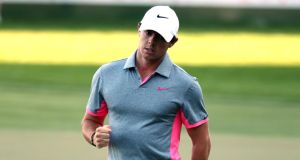 Rory McIlroy is four clear going into the final round of the Dubai Desert Classic after he carded a six under par 66 in his third round. (Photo by Warren Little/Getty Images)

Rory McIlroy will take a four-shot lead into the final day of the Omega Dubai Desert Classic after shooting a 66 on Saturday — but it looked for a while as if it would be even better for the world number one.

Following on from his impressive opening two rounds of 66 and 64, McIlroy appeared set for a tilt at the record books on day three as a birdie blitz saw him reach the turn in five under par with the seemingly easier back nine — which included three par fives — to come.

However, the Northern Irishman could not continue his blistering form as some wayward tee shots and indifferent form around the greens saw him have to settle for seven successive pars from the 10th.

McIlroy did pick up another birdie on the par-four 17th, to go with the ones he recorded on the first, third, fifth, seventh and eighth, but he then looked set to immediately cancel that out on the last after finding water with his second shot.

The 25-year-old — who had birdied the 18th hole in 14 of his previous 16 rounds before this one — managed to avoid dropping a shot, though, as he coolly drained a 15-foot putt for par to sign for a round of 66.

That putt ensured McIlroy would start the last round with a four-shot advantage over Dane Morten Orum Madsen, who followed up his 63 on Friday with a blemish-free 66.

Two shots further back in third is Lee Westwood (69) while Andy Sullivan, Stephen Gallacher, Danny Willett and Bernd Wiesberger share fourth place on 13 under after all four shot rounds of 70.