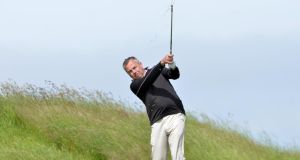 There’s a sting in the tail at Seapoint but while it meant the end of Carton House’s Gary McDermott, Warrenpoint’s Colm Campbell managed to survive and limp his way into the last 16 of the AIG-sponsored Irish Amateur Close Championship.

On a day of sparkling sunshine and southeast winds that gusted to about 20mph over the pristine Des Smyth and Declan Branigan design, Sligo star McDermott lost a three-up lead to a barrage of birdies by his new Carton House club-mate David Carey and fell by one hole.

It was an even more dramatic day for recently-crowned East of Ireland champion Campbell, who twice let big leads slip coming down the stretch but managed to get over the line both times.

In the morning, the 27-year-old was five up with six to play against Royal Curragh’s Colum Kenny but didn’t close out the match until the 17th. However, in the afternoon he had to go to the 22nd before shaking off the indefatigable Ian Lynch from Skibbereen.

Failure to ‘get up and down’ Again, Campbell was cruising. Three up through the turn, he had a 10-footer to go four up at the 12th, but missed it and the complexion of the match changed.

Suddenly back to just one up, he could only look in as Lynch birdied the 16th to square the match and then took advantage of what Campbell described as “an absolute stinker of a tee shot on the 17th” to go win with a par and go to the last leading by one hole.

Both men found the left rough. But while Campbell was fortunate to end up on the right edge of the fairway with his recovery, Lynch made the cardinal error of carving his lay up on to the downslope of a dune on the right and ended up three-putting for a six – missing from about four feet for the match after Campbell had failed from 15ft.

While Campbell missed a good chance to win the match from about 12ft at the 20th, the Cork man burned the edge after a fine approach to the 21st but then overshot the tricky fourth green, failed to move his pitch more than a few feet in the heavy rough and lost out to Campbell’s steady two-putt par.

Campbell still in hunt “I am just delighted to get over the line,” said Campbell. “Those last few holes need a lot of attention and I’m starting to make a few tired swings coming in. But I am still in the tournament and I still have a chance to win.”

Campbell is in the top half of the draw, which is arguably the strongest with Portmarnock’s Geoff Lenehan through to face former East of Ireland Eoin Arthurs with the winner taking on the victor of the clash between big hitters Colin Fairweather of Knock and 2009 Close champion Pat Murray.

The bottom half of the draw features more unheralded names with the pick of the last 16 ties the clash of Royal Dublin’s Ian O’Rourke with leading qualifier Stuart Grehan, who had holed a 35-footer for birdie on the final green to beat Warrenpoint’s Paul Reavey by one hole and dispel the spectre of extra holes.