Paul Dunne ready to push on to the next level 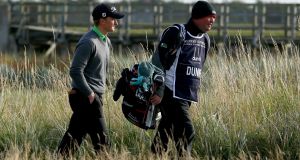 Paul Dunne with his caddie Darren Reynolds. “The European Tour is a great tour to play on and I feel like I can compete.” Photo: Mark Runnacles/Getty Images

It would probably take a degree in actuarial maths to fathom exactly how many air miles Paul Dunne eventually clocked up in his rookie season on tour.

Let’s just say it was a hell of a lot. In a global odyssey that took in tournaments in 19 different countries – ranging from South Africa to the United States to Australia to India to China – before a more concentrated campaign in Europe – every trip, every time zone crossed, was worth it as he retained his PGA European Tour card, the primary goal.

Nothing truly prepares any fledgling professional for life on tour. The illnesses. The jetlag. The boredom. All counteracted by the exhilaration, the privileges. For the 23-year-old from Greystones in Co Wicklow, the past year – albeit with no victory – has to be viewed as a success, paving a way hopefully for years of carefully mapping out schedules all with that ultimate ambition of winning. Again, and again!

On the Sunday evening of the recent Portugal Masters, a day which confirmed Dunne had kept his tour card for the upcoming 2017 season, he watched the final round unfold on television. He’d missed the cut, arrived home into Dublin Airport in the early hours of Saturday morning and saw Pádraig Harrington get the job done; another moment of inspiration from Harrington to record, to put into the memory bank for future reference.

“Pádraig is someone all Irish golfers either look up to or should look up to to. He’s someone whose work ethic is really admirable, the way he dedicates himself to getting better. I feel like there’s lots of different types of people that play golf. Some are really intense and practice really hard and try and focus everything they do on getting better.

“Others are a little more laid back and let results come. I think it is about finding what works for you but I have always been someone who is pretty serious on the golf course and pretty serious when I practice and then off it I am much more relaxed.

“For me, that’s why I look up to Pádraig. I admire the intense look in his eyes, just looks like he is loving every minute of it and that is the way I want to be . . . he’s a competitor and in everything he does he wants to win.”

And throughout the season, there had been times – “a handful, maybe” – when Dunne sat down to dinner with Harrington, other times when they’ve had chipping contests and played a few practice rounds.

For Dunne, it was all part of an on-road golfing education that, come that Sunday night of the Portugal Masters, he too had his own reason to celebrate the retention of his tour card (in 107th place in the order of merit) with an enhanced status for the coming season.

Still, it was only after Portugal, the last of the regular season events, that the actual cards down to David Howell in 111th place were dispensed.

“After the Dunhill, I felt pretty safe in terms of keeping my card. I’d felt I got the job done that week and went to Portugal really happy with the state of my game. I went with the mindset to try to qualify for Turkey (Turkish Airlines Open, the first of the Final Series) . . . then, on Friday night, after missing the cut, you start looking at the projections and possibilities.

“At one point it was projecting me at 110 and then it starts getting worrying. As the weekend went on, it felt to me like I was living on a knife-edge. But when I look back, I made it fairly comfortably in the end.”

Of the 27 players who had left the PGA Catalunya in November 2015 with hard-earned tour cards from six grinding days of Q-School, nine managed to retain them on tour in the 2016 season. Dunne was one of them.

Dunne’s first full season as a professional was an eye-opener, mainly for the amount of travel involved.

“It was a year of two halves; not in terms of performance, but in terms of travel. It was the one thing I wasn’t expecting,” he said of an initial itinerary that took in South Africa-Australian-USA-Australia-India-Spain-China. “Every time you finished an event it was Tuesday morning before you got to the next one.

“You look at the schedule and you know what’s coming, but how your body feels is something I had to get used to. Then, from the Irish Open on, it was a different story, every event was in and around Europe.”

Yet, that Irish Open appearance was fraught for a different reason. He’d arrived home from a tournament in Morocco with a bout of food poisoning which necessitated recuperation in hospital. And it was only after that tournament at The K Club that his caddie Darren Reynolds, who counts Paul McGinley among his previous players, was struck down with an even more serious complication of that food poisoning which had afflicted a number of players and caddies on that stop in north Africa.

Where Dunne had recovered completely after six days, Reynolds’ illness got progressively worse.

“The food poisoning affected Darren’s blood stream or nervous system and it caused something called reactive arthritis. He basically lost the use of his hands and feet.”

Reynolds is one part of the team that Dunne has built up around him. It includes his swing coach Eric Eshleman – based in Birmingham, Alabama and Karl Holmes, the club pro at Greystones who actually stood in as bagman for Reynolds at three tournaments.

“Karl’s been a great help, he keeps an eye on me when I’m home because Eric is based over in the States. They speak together about what I should be working on and he keeps an eye to make sure I am on the right track. He’s been a good friend pretty much over my whole time playing golf.”

The other parts of Team Dunne involve his brother, David Dunne, his performance nutritionist, and Robbie Cannon, his fitness coach. He is managed by 4sports management who look after his commercial dealings and, as he put it, the “day-to-day logistics” of a life on tour.

That life on tour garnered a level of consistency in Europe – six top-20 finishes – that retained his card, although ironically his biggest payday of the year arrived with a tied-13th finish (for $126,000) on an invite to play in the Farmers Insurance Open at Torrey Pines on the PGA Tour.

“One thing I improved on as the year has gone on is awareness of my distance control for each club, how far I hit each shot with each club. That’s something I am a whole lot better at than I was this time last year. But there’s areas in the game I need to improve on. I feel like I’m a streaky putter.

“When I putt well, I putt really well. Then I go through cold patches as well. Obviously being hot and cold is not something people say works in professional golf. I think everyone strives to be more consistent, so I can definitely get more consistent in terms of putting.

“And my biggest issue has always been getting the ball in play off the tee. My driving stats are low but I do feel like my driving has improved this year as opposed to last year. I know the stats would say something similar in terms of fairways hit but I think my parameters of miss have definitely gone down. My big misses are smaller than they were last year.”

“For now I am happy on the European Tour. It would be great to play on the PGA Tour one day. I mean, in terms of ease of travel and the money you play for, it is bigger and easier, and that’s a draw a lot of people have towards playing on the PGA Tour.

“But the European Tour is a great tour to play on and I feel like I can compete. The big goal this coming year is to try to win a tournament. I had a lot of decent finishes but it is a different ball game when you are playing to try to win and that’s the feeling I love the most.”