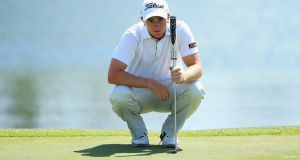 Paul Dunne shot an opening round 72 at the Australian PGA Championship. Photograph: Getty

Paul Dunne sits five shots off the lead of South Africa’s Zander Lombard following the opening round of the Australian PGA Championship.

Greystones golfer Dunne got off to a slow start on the Gold Coast, dropping two shots on the front nine before a double-bogey on 11 left him well off the pace, but he rallied with birdies on 12, 13, 16 and 18 to card a level par 72.

Dunne put his experience of playing in windy conditions to good use, despite revealing he had not slept at all on Wednesday evening.

“I’m really happy with the start,” the 23-year-old said. “I didn’t even get a second of sleep last night. I think I slept in too much yesterday, I slept about 14 hours yesterday and then it was just a long night. I was in bed at 11 and I was awake till 4.30 when my alarm went off, so I’m looking forward to a bit of rest.”

England’s Mark Foster made an excellent start in his bid to reclaim his European Tour card with an opening 69 as just six players broke par in the first round.

Foster, who lost his card after finishing 123rd on the Race to Dubai and was unable to regain full playing privileges via the qualifying school, carded seven birdies and four bogeys in tough conditions at Royal Pines Resort in Queensland.

That left the 40-year-old two shots behind South African Zander Lombard, who returned a flawless 67 despite the strong winds which sent scores soaring, with former US Ryder Cup player Brandt Snedeker slumping to an 84.

South Africa’s Dylan Frittelli and Australian Ashley Hall are three off the lead on two under, with home pair Todd Sinnott and Adam Stephens the only other players in red figures after rounds of 71.

Sinnott was on course to claim the lead after playing his first 12 holes in six under, but then carded three double bogeys in the next four holes before repairing some of the damage with a birdie on the 18th.

Foster, who almost pulled out of the event after missing the cut in South Africa last week, said: “It was a great day obviously.

“I laughed my socks off walking to the 18th green when a spectator said ‘They’ve had it easier this afternoon’. I don’t know what he was watching but the wind was blowing everywhere.

“At breakfast this morning you could hear the flag poles banging and I looked at the scores so I knew what we were getting. But the one thing the wind did was focus me really well. Three under feels like seven or eight under.”

Lombard, who is ranked 800th in the world, said: “I played really well, hit the ball solidly and it always helps things when you strike it well. It definitely got tricky out there but I think I managed it well.

“I was fortunate to travel a bit earlier and had some time to get over the jet-lag. I got a nice rhythm on Wednesday on the range and kept it going today. The Gold Coast is a lot like home for me, similar weather so I’m enjoying it at the moment.”

England’s Tom Lewis and Ireland’s Dunne, who share the distinction of leading the Open Championship as amateurs, were among eight players on level par, even though Lewis called a penalty on himself on the last.

“It was a bit of a shame on the 18th,” Lewis explained. “My ball moved a tiny bit so technically I feel like I shot one under but I didn’t know whether it was the wind or not (which caused the ball to move).

“I didn’t touch the ball but I called (European Tour chief referee) John Paramor to the scorers hut and after a chat with him I called the one-shot penalty because we couldn’t be certain if it was wind that had moved it, even though that was pretty obvious.”

World number 38 Snedeker, who is the top ranked player in the field, started from the 10th and covered the back nine in 45 with four bogeys, a double bogey and a triple bogey, before coming home in 39 thanks to four bogeys and a solitary birdie on the sixth.

Meanwhile Stepahnie Meadows got off to a slow start in her first round of the LPGA Q-School at Daytona Beach, Florida.

Needing to finish inside the top 70 in order to make it into Sunday’s final round to compete for one of 20 cards, Meadows currently sits in a tie for 119th after an opening round of 75.

This leaves the 23-year-old three over par and 10 shots adrift of the lead of China’s Simin Feng and America’s Christine Song, who both shot opening 65s.