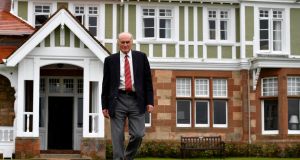 Muirfield club captain Henry Fairweather said in a statement that the outcome of the recent vote had “damaged” the club. Photo: Jeff J Mitchell/Getty Images

Muirfield Golf Club is seeking to hold a fresh ballot on women members by the end of this year after it was stripped of its British Open status six weeks ago when members rejected the proposal.

The original ballot did not reach the two-thirds majority required to pass with 36 per cent of members voting against the proposal to allow women members join the East Lothain club.

However, a statement released this morning by the Honourable Company of Edinburgh Golfers outlines how the committee plan to go back to members at a Special General Meeting to seek permission to hold a fresh postal ballot before the end of the year.

“A substantial majority of our members voted for change and many have voiced their disappointment with the ballot result and with subsequent events,” said club captain Henry Fairweather.

“The Club Committee believes that a clear and decisive vote in favour of admitting women as members is required to enable us to begin the task of restoring the reputation of the Club that has been damaged by the earlier ballot outcome”.

While women are currently allowed to play Muirfield as guests, they are not entitled to join. Just one other club on the R&A’s British Open rota – this year’s host, Royal Troon – still maintains the same policy with a vote expected on the matter by the end of the year as well.

Muirfield has received considerable bad press since the motion was rejected with the likes of Rory McIlroy and Pádraig Harrington speaking out against it.

BBC golf commentator Peter Alliss caused ruptions when he suggested that, if women wanted to play golf at Muirfield, “they would want to marry a member”.

Tales of how strictly the policy is enforced at Muirfield do not make great reading for the club with the most shocking being an incident in which a female European Tour director was denied entrance to the clubhouse and forced to eat in the kitchen during a Senior British Open held at the club.