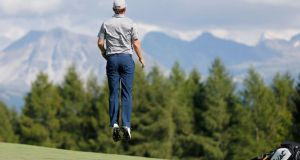 Bernd Wiesberger of Austria jumps up to see the flag on the green at the 12th hole during the first round of the Omega European Masters in Crans-Montana, Switzerland. Photograph: Peter Klaunzer/EPA

Michael Hoey carded an early hole-in-one as he opened his Omega European Masters campaign with a five-under 65 to lie two shots off first-round leader Gregory Havret at Crans Montana in Switzerland.

Among the late starters in a first-round that was delayed due to fog on the mountain-top Crans-sur-Sierre course, Hoey aced the the 191-yard third hole after opening with two pars.

The 36-year-old from Ballymoney in Antrim dropped a shot at the short par-four fifth but a birdie three on the seventh helped him turn in two-under 33.

A second birdie of the day came on the 10th before back-to-back gains on the 14th and 15th moved him to five under. He dropped a second shot on the 16th but finished on a high with a birdie three on the 18th.

Havret also had a hole in one early in his round as he shot to the top of the leaderboard with a 63. After starting with a bogey on the 10th, the Frenchman holed his tee-shot on the 195-yard 13th and followed it up with back-to-back birdie fours on par-five 14th and 15th holes to move to three under.

Six straight pars followed for the three-time European Tour winner before another scoring burst came with back-to-back birdie threes on the fourth and fifth and a second eagle of the day on the short par-four seventh.

Speaking about his hole-in-one, Havret said: “It’s a little bit strange, for a few seconds you don’t know what to do because you can’t believe it.

“Then when you hear everybody shouting and cheering by the green, you know it’s real and you start to go crazy yourself.

“After that happened, you couldn’t take the smile from off my face, because I knew that whatever happened for the rest of the round, I would have a very nice prize waiting for me. So I was very happy, and I play my best golf when I’m happy.”

Havret’s 63 gave him a one-shot lead over Lasse Jensen, the Dane carding six birdies and no bogeys in a 64, while Hoey is among 12 players that ended the day on five under.

Among the group was Danny Willett, who continued where he left off at the British Open, the 27-year-old English golfer including an eagle and five birdies in his round.

Willett’s fellow English golfers Seve Benson, Richard Bland and Tyrell Hatton are also on five under, along with a trio of Swedes in Pelle Edberg, Rikard Karlberg and amateur Marcus Kinhult.

The tournament, which is co-sanctioned with the Asian Tour, also saw 65s carded by Australian left-hander Richard Green, the South Korean duo of YE Yang and Seukhyun Baek and Thailand’s Jazz Janewattanond.

Welshman Bradley Dredge was one of six players on four under along with defending champion David Lipsky of America.

Lee Westwood, whose 42 career wins include a Crans success in 1999, recovered from a poor start to reach two under with three birdies in his closing five holes.

Another to recover from a poor start was world No 10 Sergio Garcia after he opened double-bogey, bogey before four birdies rescued his day as he signed for a one-under 69.

Dubliner Peter Lawrie is in a share of 21st position on three under after he carded four birdies and a bogey in his 67 but Damien McGrane is well down the field on three over after a 73 that included six bogeys and leaves the Meathman needing to shoot in the mid 60s on Friday to be around for the weekend action.