Damien McGrane four shots off the pace in weather-affected tournament 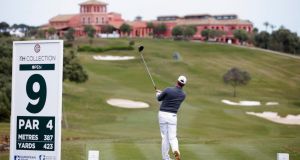 A delay of two hours and 40 minutes on Thursday due to heavy rain meant half the field were unable to complete their opening rounds on schedule, while 45 players had not finished round two before play was suspended due to darkness.

Earlier in the day, Warren had completed an opening 72 before adding a second round of 67 containing six birdies and just one bogey.

“My round didn’t finish yesterday so I had to come back and play seven holes this morning and I played okay,” the two-time European Tour winner said.

“At the start of the second round I struggled a bit with concentration, but once I got it going I played really good – long game was excellent, short game was good. I think I got the best out of my round today.

“Today and yesterday’s conditions were pretty similar, obviously without the rain. The wind is going to stay pretty strong and it’s going to be tough for the guys playing this afternoon.

“I like the course very much. If it was perfect weather it would still be a good test, but with the strong winds we have here it gets really tough at times.”

At five under par, Warren shared the lead with England’s David Horsey, who had three holes of his second round to complete. Play is scheduled to resume at 9am on Saturday.

Chile’s Felipe Aguilar was safely in the clubhouse on four under after a 69, while Spain’s Adrian Otaegui and Welshman Bradley Dredge were also four under with three and six holes to play respectively.

First round leader Jack Doherty added a 74 to his opening 69 to finish one under par, the same mark as leading Irish challenger Damien McGrane, who carded a three-under 69 in his second round.

Rookie Kevin Phelan was under after 13 holes and two over for the tournament and will come back on Saturday morning looking to move under par over the final five holes of his second round.

Simon Thornton completed his second round, a one-over 73 leaving him on three over, which is presently two shots inside the cut mark.

After opening with an 82, Peter Lawrie picked up two shots through 12 holes, but at eight over looks like missing the weekend action.

David Higgins carded a second round of 77 to finish on six over, while Shane Lowry had two days to forget after following up an opening 79 with a 78 to finish on 13 over.

Pep Guardiola confirms he will stay at City despite threat of European ban 23:29
Hugo Lloris preserves Spurs’ dignity to keep them alive for trip to Leipzig 22:46
Manchester City see off West Ham without needing to leave first gear 22:49
Rashford ‘touch and go’ to play again this season – Solskjær 22:30
Limerick advance to Munster U20 football semi-final after beating Tipperary 21:20
Here is your handy guide to sport on television this week