Malachy Clerkin: Masters of the art of delayed gratification

US Masters care not one jot what the modern sports consumer wants, needs or likes 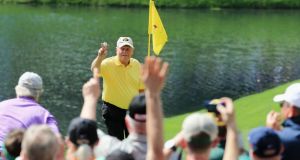 As ever, the problem with watching the Masters on TV is that there’s next to no Masters to watch on TV. It was getting on for 8pm last night by the time there was actual live footage of actual live humans hitting actual live golf balls on regular Sky Sports.

This happens every year, tradition maintained for a stolen moment even as we hurtle headlong into a future of noise and confusion. To which we can only quote the actress Kether Donohue from American sitcom You’re The Worst. “Whatever, history. You happened already. Get over it.” Just show us the golf, you fusty shower of cranks.

But no. They make you work for it. In any other massive sports event beaming out from any other venue on earth, the best player in the world would have his every move documented in glorious Technicolor from the minute he walked out of the locker room. Instead, we may as well have been following Rory McIlroy’s fortunes by carrier pigeon.

The Masters website has a shot-tracker option this year so we could tell through the wonders of computer-generated animation that his drive on the second had gone left into the trees. And that his second had gone backwards by four yards. But e’er a chance of seeing it happen? Not a one. The Masters: Golf as your granddad used to watch it.

It was around now that Sky’s coverage got going. Not the golf. Just the coverage. And the one good thing about Sky on a Masters Thursday is Jack Nicklaus. The longer he talks, the less Monty Time is foisted upon us.

Jack dropped in for an hour and chewed the fat, benignly allowing Monty and Butch and Paul McGinley kiss his ring. They showed his hole-in-one from the par-three tournament on Wednesday. They showed footage from the 1975 Masters – as if anyone gave a tinker’s cuss about it.

Meanwhile, McIlroy was fighting back from his dropped shot by birdieing the 13th. And Tiger Woods was bogeying the first before firing a birdie on the second. But to know all this you had to be following a combination of Twitter, various liveblogs and the odd snatched shot behind the red button.

And still we watched. Because it’s Augusta, because we’re saps. And once it got into its stride, it was, of course, glorious stuff. Ernie Els burning it up, Jordan Spieth strolling round like he owned the place, Tiger never less than compelling.

On the ninth, Woods hoiked a drive left onto the first green. Not so much pulled left as due east. It’s at times like this that golf analysis on TV struggles to measure up to other sports because there’s nothing in sport to make the eyes glaze over quicker than a golf bore explaining the mechanics of a golf swing. Over on Setanta, this conversation took place:

Jim Nantz: “What did you see there, Nick?”

Nick Faldo: “I always look at the levels, this is what’s so important. Lot of knee movement – right left knee movement towards the ball – head stays pretty good but then it drops down, gets stuck underneath and then just throws the arms at it.”

Nantz ( none the wiser): “Peter Kostis? You see anything there too?

Kostis: “Yeah, I just, when he gets a little quick with his transition, his arms and his body get out of sync and he relies on his hands to manufacture something at impact.”

Honestly, it may as well have been in Cantonese.

Back on Sky, Monty slid into the booth. And proceeded to slather more of the same jargony manure over it all as Ernie found the bunker by the 17th green. “He’s trying to get it airborne,” said Monty. “To get it up and high and of course, he’s left his weight on his back foot and his hands have got busy.”

Come back Shot-Tracker. All is forgiven.