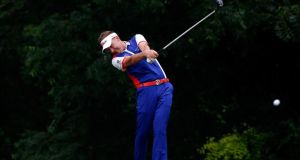 Ian Poulter drives from the sixth tee during the third round of the Crowne Plaza Invitational at the Colonial Country Club in Fort Worth, Texas. Photo: Tom Pennington/Getty Images

Kevin Na sank a 14-foot birdie putt on his penultimate hole to break clear of a tie at the top with Ian Poulter and edge a stroke in front after the third round of the Crowne Plaza Invitational on Saturday in Fort Worth, Texas.

American Na, who had been two ahead overnight in pursuit of a second PGA Tour victory, fired a one-under-par 69 in overcast conditions at rain-softened Colonial Country Club to post an 11-under total of 199.

Englishman Poulter, seeking his third win on the US circuit, missed a birdie attempt from seven feet at the par-four last and had to settle for second place after returning a 68.

Charley Hoffman carded a 66 to finish at nine under, a stroke better than fellow Americans Chris Kirk (65) and Brandt Snedeker (66).

Na, whose only PGA Tour victory came at the 2011 Justin Timberlake Shriners Hospitals for Children Open, offset a birdie at the third with a bogey at the fifth to reach the turn in level-par 35.

He picked up another shot at the par-five 11th before succumbing to a two-stroke swing at the par-four 15th where he bogeyed after missing a five-footer for par.

Playing partner Poulter, who is known for his prowess on the greens, drained a 32-foot birdie putt at the 15th to draw level with Na before the American regained the outright lead at the 17th with his third birdie of the day.

Australian Adam Scott, who won last year’s Crowne Plaza Invitational in a playoff, was five strokes off the pace after shooting a 66, ending the day level with Masters champion Jordan Spieth (67).

Due to threatening weather, the players set off earlier than scheduled in threesomes with a two-tee start.

Similar conditions have been forecast for Sunday when the players will again tee off early in threesomes in a bid to finish before thunderstorms roll into the area.