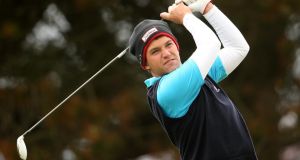 Rory McNamara was once again a tower of strength for Ireland at the European Men’s Amateur Team Championship in Silkeborg, Denamrk. Photograph: Cathal Noonan/Inpho

Ireland swept into the quarter-finals at Silkeborg in Denmark yesterday and will play seventh-placed qualifiers the Netherlands in the first matchplay contest today.

They finished the qualifying phase on 741 – 21 over par, six shots behind leaders France.

Headfort’s Rory McNamara was once again a pillar of strength for the Irish team, adding a one over 73 to his previous day’s tally of two under.

He looked to be faltering after a triple bogey at the second, but clawed it back to level par by the 13th with birdies at the seventh, eighth and 11th, only to bogey the penultimate hole.

Kevin Phelan also produced a much better second round score, finishing on 74.

Phelan was one under at the turn, with another birdie at the 11th seeing him sit in a strong position heading towards the finish, before a double bogey at the 13th and bogey at the 17th, however, saw him slip back.

Ireland also made it into the top flight – the last eight –in the European Boys Team Championship over the Murcar Links in Scotland – but they had to work hard for their place.

They got through in seventh spot with a two-day aggregate of 738 – 28 over par.

Ireland today meet England for a place in the last four.

Amber Barrett hoping hard work will pay off with Ireland 06:44
West Ham ‘really disappointed’ after win over Leeds, says Moyes 06:28
Jamison Gibson-Park embracing life as the main man 06:53
Games remain on hold as the GAA wait for word from the Government 06:49
Jack Byrne embracing ‘technical football’ in Cypriot sunshine 07:16
Here is your handy guide to sport on television this week