Golf is such a hard game to focus on going forward, but I think I have a good team around me to maintain that focus 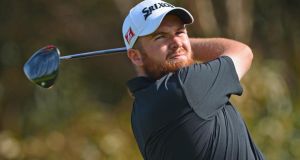 Shane Lowry, beard and all, during the third round of the Trophee Hassan II Golf at Golf du Palais Royal last weekend. Photograph: Stuart Franklin/Getty Images

At the start of this year, I did something that I haven’t done since I turned up on tour as a professional shortly after winning the Irish Open at Baltray in 2009, a win – as an amateur – which fast-forwarded any decision-making to go pro: I set myself long-term goals, ones that I believe are achievable.

The decision to set long-term rather than short-term targets really came towards the end of last season. I remember going into the players’ lounge after a disappointing second round of the DP World Championship in Dubai, the finale to the PGA European Tour season back in November, and my mum was sitting there with a friend. She was almost afraid to come over and talk to me because I was in bad form. I sat down and thought about that afterwards. It wasn’t right. That wasn’t me.

I don’t want golf determining my mood off the course. I felt at the end of last year that golf was influencing how I felt that evening; or, if I went out for dinner, what sort of mood was I going to be in. That’s not Shane Lowry at all. I am very driven and I want to do very well at golf but, at the end of the day, I want to be happy as well.

And one of the things I’ve tried to do since is to leave whatever happens on the golf course behind. If you’re happy off the course, you’re going to be happier on it and probably play good golf as a result of it.

Winter break
Over the winter break, I’d thought a lot of that little incident involving my mother. I talked it over with my coach, Neil Manchip, a number of times. When I went to Dubai again in January for some warm-weather training, Neil had arrived a day earlier and, when I got to the apartment, he had all these posters on the wall. He had split my whole life up into different sections. Off the course. On the course. Golf. Friends. Family. We talked through it all and I saw what I wanted to get out of life as opposed to just golf.

Golf, to be honest, is a whole life. Some people have jobs and it involves going to work nine to five and coming back and you do the same thing every week for 50 weeks a year and you have a couple of weeks off. But golf is a whole life. All your friends are involved. Your family. Your girlfriend, or whatever. And I just want to be a happy person. I want to enjoy my golf and I want to enjoy my time off the course.

In the past, my goals have been short-term. Like, you’re in the top 60 in the world and you need to be in the top 50 and you need to finish tied-fourth this week or stuff like that. It is hard to go in and focus on just playing golf when you’re focused on trying to finish tied-fourth. Having long-term, achievable goals is, I think, a better approach which I’ve set for the seasons ahead rather than in the week of a tournament.

To achieve that, it is important to have people to turn to. I spend more time with my caddie, Dermot Byrne, than with anyone else. I probably spend more time with him than he gets to spend with his wife. Me and Dermot get on great. Neil (Manchip) is now one of my best friends. The lads at Horizon Sports are really very good. I’ve a personal trainer, Barry Soland, and a nutritionist, Marcus Shortall, with me. All part of the team.

Barry is the strength and conditioning trainer with the Kildare GAA team and we have a lot in common, always kicking for points in the gym. I think I have a very good team of people. I listen to them. Golf is such a hard game to focus on going forward, there are a lot of distractions. I think I have a good team around me to maintain that focus.

Good weekend
The season so far has been a slow-starter. I missed the cut in Abu Dhabi and by just one shot in both Qatar and Dubai. It’s annoying when that happens, because when you miss the cut by a shot you are generally not that far away from having a decent finish with a good weekend. It is a fickle game at times.

I genuinely do believe and do feel that I am doing all the right things and doing what I need to get where I want to be.

I am a better player now than when I turned pro. My good golf was good back then but I am consistently a lot better, more mature. I am 100 times better now in all aspects of my game. A better driver. Better iron play. My short game is better. I’m a better putter, better mentally and physically. I think it is chalk and cheese from then to now.

In two weeks, I am back playing again – in a dual tournament event in Spain – which will lead me in to a good, strong schedule for the rest of the season. For now, the beard is staying. It started out as a charity fundraiser for Movember but my mother and my girlfriend both like it.

I see Gordan D’Arcy got his shaved off after winning the Six Nations. Maybe if I did win, I would shave it. But I’m not going to say I am not shaving until I win. You never know, that could be a while. Hopefully, it won’t be.