I had to decide between golf and football: I just loved golf 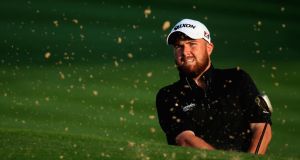 Shane Lowry in action during the second round of the 2014 Omega Dubai Desert Classic on the Majlis Course at the Emirates Golf Club in Dubai, United Arab Emirates. Photograph: Warren Little/Getty Images 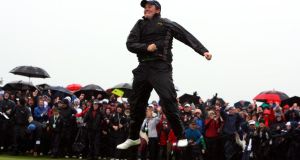 Shane Lowry celebrates after holing the putt to win the Irish Open during a play-off on the 18th green. Photograh: Cathal Noonan/Inpho

The question is often put to me about how I came to play golf. After all, I come from a part of the country, Clara, Co Offaly, where Gaelic football is king. There’s football and hurling, not much rugby and a little bit of soccer. My dad, Brendan, had won an All-Ireland medal with Offaly, but it was his impulse to buy me an old nine-iron and a putter that first set me off on a different sporting route.

There’s a little pitch-and-putt course near our house, and I was nine when I said something along the lines of, “I wouldn’t mind giving that a go”. My dad took the hint. He went down to a little grocery shop called Kenny’s, where they would sell those old commando balls and plastic tees, and he came back with the first two clubs I ever owned.

The next problem, however, was to be allowed to play on the pitch-and-putt course. I was nine and there was an age barrier – you had to be 10 before you were allowed in. I did what any young fella would do: I lied about my age. I told them I was a year older than I was, that I was born in ’86; this would come back to bite me a few years later when I wanted to play in a juvenile tournament where the age limit was under 16 – I wasn’t allowed to play until I confessed to fibbing about my age a few years earlier.

Anyway, pitch and putt proved to be a great introduction. There was a big group of us and we’d spend all day up there on the courses during the summer when we were kids. When I got to 12 or 13, I started playing a bit of golf as well. My uncles used to bring me out to Raheen, where there was a nine-hole golf course.

I can remember the first time I went to play golf. My cousin, Conor Henry, who is a year younger than me, was down from Dublin and my uncles were taking us with them. My mother, Bridget, was getting us ready and put two pairs of football boots on us because she didn’t have a clue either. It took my uncles to tell us we weren’t allowed to wear them.

The first club I joined to play golf was in Moate, where I stayed for a year. I was 13. I didn’t really take any interest, mainly because I was also playing a bit of football and because I had no friends over there. I’d have to go over there, a 20-minute drive, be dropped off, and I just didn’t really get into it.

When I joined Esker Hills, which had opened a couple of years earlier, I caught the bug. There was a group of us got playing together. One of them, Derek Molloy, who plays hurling for Offaly now, became a great friend. The older men in the club used to bring us out with them and we became really involved in the club. I remember when I was 15 – still playing off an 18 handicap – I “won” the captain’s prize. I shot 40-something points, but juniors weren’t allowed to win, so I was given second.

I hadn’t had any lessons up to then but after a while, I was brought into the Leinster coaching system and used to go to Donagh McArdle in Tullamore on Saturday mornings for lessons, which were good.

It was when I was in third and fourth year in school that I really fell in love with golf. I remember transition year. All I did was play golf for the whole year, which was great. I got to fifth and sixth year and kept on playing. Luckily enough my parents were reasonably lenient and let me play.

Of course, I still had to go to school and still had to do my Leaving Cert. They wanted me to do well and I did okay. I was probably a little more intelligent than my Leaving Cert results actually showed. My claim to fame is that I lost a shot – I think it was 1.1 – during the exams. I played the club championship in Tullamore the day before my maths two paper and shot two rounds of 70 in the 36-hole event to win.

When I finished school, I knew I wanted to play golf. Donagh is the one who told me that I would have to make a decision between playing football and golf, that I couldn’t do both. I had just made the Leinster boys’ panel at the time. Obviously, I picked golf.

As a footballer, I was probably just above average. I played for Clara, but never played underage for Offaly. I was a bit of a corner-forward, obviously not too light on my feet, but when I got the ball in my hands, I knew where the goals were.

I was a free-taker too, a good man to kick a point back then. If I was of a better standard, there might have been a bit of an argument for me to keep playing football. Obviously, I picked golf. I just loved golf.

My Leaving Cert year was the first year I was put into an Irish panel. I got in by accident in a way. Rory McIlroy pulled out for some reason and they needed one more to make up a panel of 14. I got the call, went to play a number of trials and finished up coming first and second and got selected for a six-man team. That was when I first started working with Neil Manchip, my coach. I had literally come from nowhere, out of the blue. That was the year I thought to myself that I was good enough to make it.

I think I was lucky. Golf came easy to me. I never over-practised. I used to just go out and play and be so happy out on a golf course. There was no golfing tradition in my part of Offaly. In Birr, down the south of the county, Justin Kehoe and Richie Coughlan had made a name for themselves and went out on tour, Richie in America, but not many played golf in Clara when I started playing.

Everyone plays now, it’s actually mad to see. I remember a few weeks after I won the Irish Open (in 2009) and a driving range had opened in the town and you’d be seeing kids walking out of the range with just one club in their hand. Even in Esker Hills, the impact has been huge. When I started playing there was only five or six juniors. My dad is over the juniors now in Esker and he probably has between 50 and 80 there. It is great to see and I like to think I have had a bit of an input. Srixon and Cleveland are great at sending golf balls and some prizes down to them.

I love getting to Esker Hills, get on really well with the family who own it. My uncle, Tommy Scanlan, is the captain and he organised his drive-in for last week so that I’d be around.

My dad started playing golf after I joined and actually became quite good and played off seven at a time. He was handy enough and it was great growing up. Me, him and my younger brother, Alan, used to have great battles playing for a fiver.

Golf gives a great connection between a parent and children – to head out there for four hours or whatever and play 18 holes of golf. It is something that you don’t do playing football or anything like that. I think it is great.