Graeme McDowell in the hunt at European Open 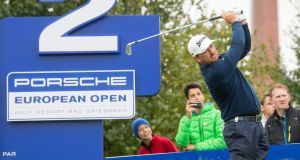 Graeme McDowell is four shots off the lead of Australia’s Richard Green after posting an opening round 68 in Bavaria. Photograph: Epa

Graeme McDowell posted an opening round 68 at the Porsche European Open to leave him four shots off the lead and in with a fighting chance of achieving his goal of resurrecting his season in Bavaria.

Major winner McDowell has managed just one top-10 finish all season but is well placed for another after the first day at Bad Griesbach Golf Resort, following a three-under par round which included five birdies.

The one blemish on McDowell’s scorecard came through a double-bogey seven on the eighth hole, and he now lies four behind the lead of Australia’s Richard Green, who is on course to turn the tables on the tournament sponsors after carding an opening 65 on Thursday.

Green is a motorsport enthusiast and raced a Porsche GT3 in Norway last week, an expensive hobby meaning he would no doubt relish claiming the first prize of €332,000 on offer at Bad Griesbach Golf Resort.

“Porsche is one of my favourite automobiles out there. I have two myself so they’ve made their bucks out of me,” the 44-year-old left-hander said after firing six birdies and no bogeys to finish one shot behind Bernd Wiesberger and Benjamin Hebert.

“I race one and I have a GT3 at home. I love them. They are an awesome car so to see them as a sponsor this week has a good feeling. The European Open is a big tournament, it has a prestigious name, and it is one I would like on my list.

“I raced last week in Norway and had a great time. I’m planning on doing a little more next year and trying my luck. If it falls in with the golf schedule I will do it more. I’ve only been able to race once or twice a year because of golf, but at this stage of my career I might be able to fit it in a little more.

“I finished eighth out of 22 last week and I was to the tail-end of the GT3 class, but for my first time at that track in those conditions I did pretty well. I didn’t have car set-up help, I just jumped in it and drove it. Hopefully next time with the experience I will be better.”

Hebert carded eight birdies and one bogey in his 64, which was matched by a flawless effort from world number 30 Wiesberger, the highest ranked player in the field.

Green was joined on six under by playing partner Richard Bland, Graeme Storm and Darren Fichardt, with 58-year-old course designer Bernhard Langer just a shot behind alongside American Hunter Mahan on a day of low scoring.

Storm is ranked 127th on the Race to Dubai and needs a strong finish to keep his card for next season, something he managed last year when losing out in a play-off for the European Masters, having won a BMWi8 for a hole-in-one in the third round.

“I’m very pleased and happy to shoot 65,” Storm said. “It all seemed to go my way today. I’m in that precarious position of trying to keep my card again, the same as the last couple of years, but I’m grinding away and trying to get through it.

“I am shooting decent scores. My temperament is far better than it was six months ago. I’ve been trying to get the mental side right and it is starting to click.”

Kieffer is looking to make the cut in his 22nd consecutive stroke play event, which would be the longest active streak on the European Tour.