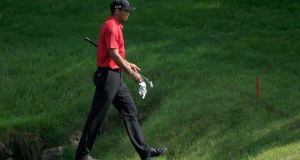 Tiger Woods is ranked 181st in the world and showing no signs of improvement. Photograph: Getty

The latest indication that golf will survive and maybe even prosper without Tiger Woods as a leading contender arrived from the R&A this week. The confirmation that the Open Championship’s live television rights in the United States have been renewed – adding to the hundreds of millions of dollars this will mean for one of golf’s ruling bodies over a 12-year period – was a nod to NBC’s desperation to land a deal which ESPN was indifferent towards. However, TV executives are not devoid of all sense: the deal also illustrated the appeal of golf in the long term, when Woods will no longer be a factor.

While there is no precise time frame for the end of the Woods era, his struggles on the course mean competitively Rory McIlroy, Rickie Fowler, Jordan Spieth and their peers dominate the narrative. For all those who believe golf cannot prevail without Woods, or even someone approaching his status, there is regular evidence to the contrary. The sport, just like any, evolves, as it did when Jack Nicklaus edged into retirement.

There may not be anyone like Woods soon, there may never be, but golf need not vanish from the sporting radar because of that. Other features, such as the time it now takes to complete rounds and the cost of equipment, are more damaging to golf’s evolution than the regression of a marquee figure. The trouble is people seem scared to admit as much, both in fear of writing off Woods and examining the broader subjects golf must battle.

Scrutiny of Woods’s game is increasingly uncomfortable. At the Memorial last weekend, a venue where he used to be able to prevail for fun, the 39-year-old followed up a Saturday 85 with a Sunday playing on his own, the odd man out at the tail-end of the field. He was unable to progress from that position. Four rounds, 302 shots – 29 worse off than the play-off competitors, Justin Rose and David Lingmerth. For the first time in his career, Woods made six double bogeys or worse in a single event.

Discussion of Woods before the US Open, which next week he will seek to win for a fourth time, at Chambers Bay in Washington state, is of the freakish kind. But he will seek to win it: despite every blow to his confidence, the mindset of chasing success apparently never wavers. Onlookers, meanwhile, are left asking whether he may make the cut and how badly he might score on a venue which, if the USGA is true to form, will not be even close to forgiving.

If you are fond of betting on the ludicrous scenario, Woods is priced between 40 and 66-1 to end his major-winning wait on the outskirts of Seattle. The sad thing is, this is not exaggeration. And it is sad; the fall from grace of a once magical sportsman cannot be regarded as pretty viewing.

Woods probably felt compelled to end an absence from competitive action, as was the case at this year’s Masters. He seemed to feel a form of duty, not only to himself, but to golf. It is also admirable that he is willing to perform under the scrutiny which surrounds his every move, amid a realisation that only tournament play will reveal his current level.

The problem, though, is there is no clear sign of improvement. After eight months with another coach, Chris Como, and despite regular utterances to the contrary, you would struggle to pinpoint any area of technical progression. If disastrous stretches of holes were offset by routine brilliance, there would be cause for optimism. But they are not.

Woods gives the impression of being technically muddled – a strange scenario for someone so naturally gifted. Extended breaks, whether through fitness ailments or a desire to have his golf “tournament ready”, have made no material difference at all.

Nick Faldo has asked how much more Woods, now ranked 181 in the world, “can handle all of this”. Brandel Chamblee, a respected analyst for the Golf Channel, pointedly added that: “Time hasn’t done this to Tiger. He has done this to himself”. The latter point is a nod towards Woods’s desire to constantly remodel what was already a dominant golf game. In his defence, injury was a mitigating factor.

As he lurches from embarrassment to embarrassment, the logical question to ask is how long Woods might give himself to get it right. His greatness is undeniable, but so too is the fact Woods cannot call on his once imperious touch any more. This process of making up the numbers in tournaments he used to win will torture Woods, one of the most ferociously competitive players who has ever lived.

That is all as relevant to those confidently predicting some sort of imminent return to winning form as to Woods himself. In a season and a half, Woods is a combined 51 over par in PGA Tour events. He insists rankings are not a fair reflection of where he is. Bare facts show the likes of Inhoi Hur, Troy Merritt, Benjamin Herbert, Scott Pinckney and Wade Ormsby ahead of him. The list goes on and on.

So for how long does he persist? This US Open promises to be a footnote. The Open Championship at St Andrews already bears resemblance to a line in the sand. In 2000 and 2005, he won, by eight and five shots respectively, at the Old Course. Even Woods himself will inevitably glance back to the peak of his powers when returning to Fife next month.

At a venue he could at one time have successfully negotiated using hickory-shafted clubs and tennis balls, further failure would be a cruel blow. History, that great ally of this 14-time major champion, warns us against writing him off. The trouble is, that past is being constantly outweighed by a reality that can not go on for ever and, in the wider sense, does not need to.