‘I’m lost for words. I’ve been waiting a while and I started doubting, so I’m very happy’ 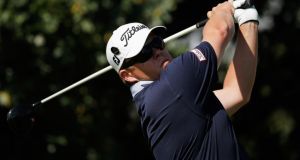 George Coetzee of South Africa hits his tee shot at the 18th in the final round of the Joburg Open . Photograph: Dean Mouhtaropoulos/Getty Images

Fellow countryman Justin Walters had held the overnight lead alongside another South African in Thomas Aiken but neither of the leading duo could break par in their final rounds, leaving the way open for Coetzee to claim his first win on the European Tour.

Victory at the Royal Johannesburg and Kensington Golf Club was also enough to earn the 27-year-old a spot at this year’s Open Championship where he will be joined by Walters and South Korea’s Jin Jeong.

The top three were handed a place at Royal Liverpool but Englishman Tyrell Hatton, who also finished on 16 under, misses out due to his 276th position in the world rankings being lower than that of Walters and Jeong.

Coetzee had begun the day four shots off the lead but birdies at the first, fourth, sixth and eighth holes saw him move into the lead.

He picked up a further shot on 10 and another birdie at 15 helped him to a flawless six-under-par round and a three-shot victory.

“I don’t know what I’m feeling,” Coetzee told www.europeantour.com. “I’m lost for words. I’ve been waiting a while and I started doubting, so I’m very happy.

“I got to share this with my family and my friends. It was my mum’s birthday on Saturday and I wanted to do it for her as I forgot to buy her a present.”

Hatton also fired a 66 as he recovered from a bogey on the par-three second to roar back up the leaderboard with seven birdies including a pair on 17 and 18.

Walters never really got going in his round and a bogey on the par-five eighth which dropped him back to level par for his round allowed Coetzee to leapfrog him into the lead.

Two further dropped shots and a birdie followed on the back nine as the 33-year-old ended his week with a 73.

Jeong recorded a one-under-par 71 after reaching the turn level and picking up a shot on the back nine.

Aiken was left frustrated by his inconsistency as he picked up four birdies but gave back six shots, including four on the back nine, to finish with a 74, four shots off the lead.

Also on 15 under was England’s Andy Sullivan who recorded the round of the day with a 65.

Four birdies and a bogey saw him reach the turn in 34 and he came home in 31.

Alvaro Quiros and Matthew Baldwin were also in the group on 15 under with Danie van Tonder on his own a shot further back. Former Ryder Cup player Ross Fisher was amongst a large group of players on 13 under.

Liverpool eyeing another comeback; Outline plan for return of club rugby 07:35
Seán Moran: DRA saving the GAA a lot of money for 16 years 06:00
Sarah Lavin bidding to clear last hurdle on the way to her Olympic dream 06:00
Basketball’s loss is rugby’s gain as Lauren Delany makes up for lost time 06:00
Gordon D’Arcy: Béibhinn Parsons is the gift, IRFU must now do the giving 06:00
Here is your handy guide to sport on television this week