Garcia heading in the right direction

Spaniard leads by one in Houston, Harrington’s Masters dream over as he misses cut 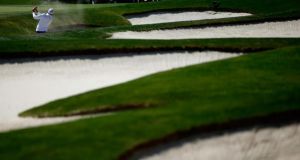 Sergio Garcia of Spain hits a shot out of the bunker on the fourth hole during round two of the Shell Houston Open. Photo: Scott Halleran/Getty Images

Sergio Garcia believes he needs to have more faith in his ability in order to translate his current consistency into major championship success.

Garcia has had 12 consecutive top-20 finishes worldwide since late last season, including wins in Thailand and Qatar, and is well positioned to continue that streak after a second round of 65 in the Shell Houston Open.

The Spanish star carded five birdies and an eagle to claim the halfway lead on 12 under par, one shot ahead of world number 11 Matt Kuchar, who bogeyed his final hole in a 67.

Asked how he could translate his fine form into a first major title ahead of next week’s US Masters, Garcia told the Golf Channel: “I think I have to do the same things.

“Every week is different but I just have to try to feel the same way, try to believe in my ability the same way and hope that things happen.

“Today I was a little fortunate on a couple of holes and was able to make a couple of nice pars on 16 and 18 to keep my round going. You need those things more in majors than regular events and hopefully I will be able to do it.”

Garcia was ranked second in the world in March 2009 but took a two-month break from the game the following year saying he needed to “miss the game a little bit”.

“Everybody knows what I went through, which is pretty much what everybody goes through in their life,” said Garcia, who was understood to be upset by the end of a long-term relationship.

“It is not fun to go through some of those emotions. But you have got to learn from those downs and then enjoy the highs as much as you can. You also can’t take them for granted.

“I am definitely a lot happier. That doesn’t mean I am going to play well every time but at least you know that your frame of mind is in a bit of a better state. It is the best I have felt going into a major for a while.”

Garcia shared the first round lead in the Masters last year after an opening 66, the first time he had led a major since the 2007 Open when he was out in front for three days, but was caught on the fourth and eventually lost out in a play-off to Padraig Harrington at Carnoustie.

The 34-year-old finished second in the US PGA Championship as a 19-year-old back in 1999 and has had 16 top-10 finishes in 61 major appearances, the last of which came at Augusta after a second-round 76 put paid to his chances.

Masters favourite Rory McIlroy had been “really happy” with his form from tee to green during an opening 70 and got off to a flying start on Friday with birdies on the 10th and 12th and picked up another shot at the first.

However, the 24-year-old then missed from three feet for par on the third and did well to drop just one shot on the sixth, scrambling a bogey five from a greenside bunker after taking a penalty drop following a wayward tee shot.

A round of 71 left McIlroy three under par, but there was much worse news for Ryder Cup team-mate Ian Poulter, who missed the cut after a second round of 77 which included a back nine of 41 and triple-bogey seven on the 11th, where he twice found the water.

Before heading to Augusta for a weekend of practice — rain is forecast on Monday and Tuesday — Poulter wrote on Twitter: “To say I’m disappointed is a slight understatement, making the odd mistake & it’s very costly. Swinging it fine.”

Former world number ones Luke Donald and Lee Westwood were both two under but three-time major winner Harrington, who needed to win here to qualify for the Masters, was reported to be suffering with a finger injury as he struggled to a 79 to miss the cut.

1 Owen Doyle: Creeping professionalism of schools rugby a threat to the game
2 Champions Cup: Leinster will meet Saracens on Saturday evening
3 Ole Gunnar Solskjær insists he is up to the challenge at United
4 GAA officials and referees brace themselves as new rules kick in, and this time it's for real
5 Scotland’s Finn Russell missed training after Sunday drinking session
Real news has value SUBSCRIBE

Roger Federer edges John Millman in five-set Melbourne thriller 15:02
Champions Cup: Leinster will meet Saracens on Saturday evening 13:18
Bill Beaumont seeks re-election as World Rugby chairman 12:07
Sam Bennett finishes second Down Under after route mistake 12:03
Ole Gunnar Solskjær insists he is up to the challenge at United 11:40
Here is your handy guide to sport on television this week