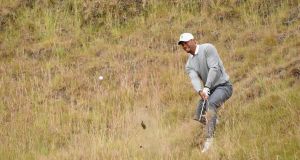 Tiger Woods: reduced to a figure of fun when he was subjected to laughter from spectators as he topped a three-wood on the 18th on his way to an 80 on Thursday at Chambers Bay. Photo: Ross Kinnaird/Getty Images

Where once he prowled a golf course as if it were his domain, capturing 14 Majors on his CV and for the best part of 20 years looking like the best player ever to have swung a club, these days he is like a lost child in the wilderness.

His experience of this 115th US Open – a championship he has won three times, most recently in 2008 – has been quite wretched.

On Thursday, as he posted an 80, he was subjected to laughter from spectators when he topped a 3-wood on the 18th hole. Laughter, reduced to a figure of fun. Who would ever have thought it?

Woods is a player seeking to solve the enigma that is himself. He has changed swing and coaches time and time again, but increasingly it looks as if this ongoing quest to find a solution is nothing more than self-delusion.

In just over a year, he has fallen from a position as world number one – and confidently expected to finally return to the winner’s enclosure in a Major – to a current position of 195th.

He is on a downward trajectory with no sign of the slide being halted any time soon.

“I hate to watch this,” said Weiskopf, winner of the 1968 British Open, adding: “I’m an avid fan. When you’re at the top of Everest and now you’re in a coal mine . . . ” He tailed off, unable to finish the sentence, but the message was clear: Woods’s freefall had taken him to a deep, dark place.

The numbers tell a story in golf. Woods had only one round in the 80s in 1,241 rounds of golf through his professional career until this season.

He has had three this year alone, one of them a career high 85 in finishing last in last month’s Memorial tournament.

Woods is working with swing coach Chris Como since the end of 2014 but the evidence of any improvement is sporadic.

Mostly, the evidence points to a disimprovement; that he is struggling to know where the ball will go.

“I’ve gone through tough phases in every one of these things and I’ve come out okay,” said Woods of the series of swing changes he has undergone through the years, under Butch Harmon, Hank Haney and Sean Foley.

Except, such confident comments aren’t backed up any more by the evidence of the golf course.

He hasn’t won a Major since the 2008 US Open and that quest to match Jack Nicklaus’s record career haul of 18 Major championships looks further away than ever.

In yesterday’s second round, Woods at least signed for a score in the 70s rather than the 80s. A 76.

But he missed the cut, another Major opportunity has come and gone.

It marked only the second missed cut of Woods’s career in a US Open, the other being at Winged Foot in 2006.

Next up, Woods will tee up at St Andrews, a favoured hunting ground, in the British Open.

But the Tiger Woods set to return there is a far cry from the one who once prowled the old links is commanding fashion. He is no longer in his prime.

“On a golf course like this you get exposed and you have to be precise and dialed in. And obviously I didn’t have that. Obviously I need to get a little better for the British Open and I’ll keep working at it,” he said.