Dylan Frittelli takes control in Beijing as Larrazabal falls back 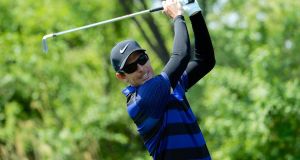 Dylan Frittelli of South Africa plays a shot during the second round of the Volvo China Open. Photograph: Getty Images

South Africa’s Dylan Frittelli will take a three-shot lead into the final day of the Volvo China Open after a second flawless round in succession in Beijing.

Frittelli followed a 63 on Friday with an equally impressive 64 in Saturday’s third round to reach 19 under par at Topwin Golf and Country Club.

Overnight leader Pablo Larrazabal carded five birdies and three bogeys in his 70 to lie 16 under, with former champion Alexander Levy another four strokes back following a 71.

Larrazabal began the day with a three-shot lead and moved further ahead with a birdie on the second, but then three-putted the fourth and seventh, the latter mistake causing the Spaniard to give himself a sarcastic round of applause.

Frittelli had birdied the fourth, sixth and seventh to take over the lead and picked up another shot on the par-five eighth to move two shots clear before Larrazabal narrowed the gap on the 10th.

Both players birdied the 11th and 12th before Frittelli stretched his advantage to three shots with a birdie on the 15th and Larrazabal’s third three-putt of the day on the next.

England’s Chris Wood, who has not recorded a top-10 finish since shortly after winning the BMW PGA Championship last year, is in fourth place on 11 under after a 65 marred only by a solitary bogey on the 17th.

Lee was penalised a shot for slow play on the 14th, turning a bogey into a double-bogey six in a round of 73, while Fisher made a hole-in-one on the sixth and an eagle two on the 15th in his 64.

Coetzee was one over par for the day playing the 18th, but saw his wayward approach bounce off a grandstand to the left of the green and finish just three feet from the hole to set up an eagle.

1 My favourite sporting moment: Roscommon minors restore pride to a county
2 Pro14 nations could miss out on €15m in TV revenue if league is not completed
3 Harry McNulty: Seeing the world, from Sevens to dog-sledding
4 America at Large: Hurling fan Dowling leading the fight against Covid-19
5 Spectator sues Tiger Woods and his caddie over incident in 2018
Real news has value SUBSCRIBE