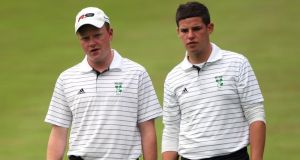 It was another day of chaos in the Cathedral Eye Clinic North of Ireland Amateur Championship at Royal Portrush, as once again the sea mist drifted in after lunchtime, disrupting the best laid plans of the hard-working officials.

After a third of the field had to return yesterday morning to complete their second qualifying round, it was planned to then play the first matchplay round and part of the second but that didn’t happen.

It was touch and go if even the complete first round could be played as players struggled, at times, to see more than 100 yards in some places on Dunluce.

Eventually, it was decided before 8pm to abandon play for the day with only a little over half the first-round matches completed and just five second-round clashes started.

What was decided, however, was the winner of the Silver Medal and after a long, anxious wait Brian Casey from Headfort got the nod. It was close as Ben Best (Rathmore) and Tiarnan McLarnon (Massereene) joined Casey on five-under-par 135 at the top of the leaderboard.

On countback Casey was the winner but only on the back nine as he and Best had identical scores of 67 (Valley) and 68 (Rathmore). McLarnon took third place.

Casey, who didn’t have to complete his second qualifying round yesterday morning, didn’t waste time in disposing of the challenge of his Ardee friend Eugene Smith. Casey stormed into a four-hole lead after five on his way to a 5 and 4 victory, being one-under par when the match ended.

In the second round, Casey again met up with another Ardee pal, this time Evan Farrell but the pair only got a few holes before the horn sounded to stop play.

Biggest victory of the day was a 7 and 6 demolition that Scottish-born Lurgan man David Sutton dished out to luckless Gavin O’Connor (Malahide). The winner was five up after seven holes and turned nine up.

Colin Wilton, originally a Banbridge player but now playing out of Castleblayney, at Concra Wood, was also in form as he sped to a 6 and 4 win over Ian Kettyle from Rathmore.

This morning Wilton will play Warrenpoint’s Stephen Coulter who defeated Co Sligo’s Gary McDermott 3 and 1, after he compiled the final seven holes of his qualifying.

The rarest result of the first round was achieved by a shocked Paul Reavey from Warrenpoint. “I was five up after 11 holes when my opponent shook hands and conceded.”