Darren Clarke likely to favour experience in his selections

Lee Westwood and Martin Kaymer viewed as certainties, third spot is up for grabs 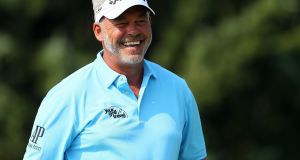 The ballroom of the Wentworth Club in the stockbroker belt outside London will provide Darren Clarke with an appropriate location for some grandstanding. The cameras will be focused in on the Ulsterman come this afternoon as he finally lays his cards on the table, in selecting his three captain’s “wild card” picks for Europe’s defence of the Ryder Cup against the United States at Hazeltine from September 30th to October 2nd.

Clarke has been positive given the cards already dealt to him, which has five rookies (Danny Willett, Chris Wood, Andy Sullivan, Matthew Fitzpatrick and Rafa Cabrera Bella) in his team via the automatic selection route. In effect, it has placed an even greater emphasis on ensuring the team that will set out in the quest for an unprecedented fourth successive win by Europe will be bolstered by old-stagers who have experienced Ryder Cup pressure before.

Who the third player will be, though, is open to some measure of debate although Luke Donald has, rather surprisingly, emerged as a likely lad – well, with the bookies anyway!

Graeme McDowell, however, seemed to rule himself out of earning a call-up. In a twitter exchange over the weekend, the Northern Irishman – who has played in the past four Ryder Cups – admitted: “I think I’m done unfortunately. Would have loved to be there . . . seriously outside chance. Playing well but haven’t showed enough.”

With G Mac seemingly out of the equation, Clarke – who has kept his cards close to his chest so far – will finally reveal the three selections and the reasons why when he makes his announcement, shortly after 12.30pm, in the old ballroom.

Westwood is almost certainly to be named in the team, having come up just short via the automatic route. And although he didn’t manage a win this season, Kaymer – with six top-10 finishes in his last 10 outings on tour – would seem guaranteed to be handed one of the other two available places.

“It would be another great experience of my golfing career, and to play four Ryder Cups in a row would be amazing,” admitted Kaymer.

Scottish golfer Russell Knox, who is ranked 20th in the latest world standings, has strong criteria in his favour, but Kaymer actually believes the in-form Thomas Pieters – fourth in the Olympics, runner-up in the Czech Masters and winner of the Made in Denmark – would fit the bill.

“If I would be the captain, [Pieters] would be my pick, that’s for sure, because he brings something special to the team. He hits the ball far and he’s very good on short game and obviously he proved that he can play under pressure very well, and he’s a nice guy . . . it’s a tough decision, but I would pick Thomas for sure.”

His opposite number Davis Love III has four of his own wild cards to name to add to the eight men who qualified automatically at the conclusion of the USA qualifying process following the Barclays, where winner Patrick Reed nudged his way onto the team. Love will name three of his picks next week and finalise his team on September 25th with his fourth and final selection.

In contrast to Europe, all but one of the players to automatically make the USA team have Ryder Cup experience. Kopeka is the odd man out on that front, the only rookie in their midst.