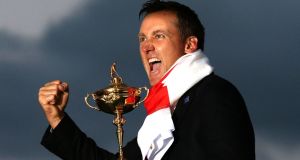 Ian Poulter has been appointed as a vice-captain for the 2016 Ryder Cup at Hazeltine after a foot injury ruled out his chances of playing. Photo: Andrew Milligan/PA Wire

Ian Poulter has been appointed as a vice-captain for the Ryder Cup at Hazeltine after a foot injury ended his chances of qualifying for the team.

Poulter, who is expected to be sidelined for four months, said in a statement: “Everyone who knows me knows how much the Ryder Cup means, having given me memories to savour over the past 12 years and created friendships that will last a lifetime.

“Therefore when it became clear, given my current foot condition, that I would not be in a position to try and qualify for the team for a sixth time this year or indeed be able to justify a wild-card pick, I was truly honoured and delighted to be asked by Darren to be a vice-captain.

“The best moments of my career have come when I have been wearing the blue and gold crest of Europe on my chest, knowing at the same time that the contest means so much to every European player and to every European fan, either in the crowd or watching back home on television.

“Darren shares that same passion and he knows I will be there to assist him and the 12 players who will line up at Hazeltine in any way I can.

“We have a tremendous record in The Ryder Cup in recent times, having played with passion, desire and commitment. It is something we should be proud of and, rest assured, I will do everything in my power to maintain that intensity and help Europe’s quest to retain the trophy.”

Poulter has played in five Ryder Cups and been on the winning side four times, as well as being the leading points scorer in the 2008 defeat at Valhalla.

The 40-year-old famously sparked the ‘Miracle at Medinah’ in 2012, carding five straight birdies to partner Rory McIlroy to victory in the Saturday afternoon fourballs against Jason Dufner and Zach Johnson.

Before the 2014 contest Poulter had won an impressive 80 per cent of his matches in the biennial contest, but he suffered his heaviest ever defeat in a 5&4 loss alongside Stephen Gallacher in the opening fourballs and halved his other two matches at Gleneagles.

Poulter did win all three of his matches in the EurAsia Cup in January, but is currently 86th in the world rankings and has not won a tournament since the WGC-HSBC Champions in 2012.

Clarke, who was Poulter’s partner in the latter’s first Ryder Cup match in 2004, said: “I am absolutely delighted to name Ian as my fourth vice-captain for the match at Hazeltine.

“Ian’s Ryder Cup record speaks for itself and stands comparison with anyone in the history of this great contest. It goes without saying what a vital presence he will be in our team room come September.

“I picked Ian as a wild card for Europe’s EurAsia Cup team in January and while he delivered on the golf course with three wins out of three, I also saw first-hand his influence off the golf course, especially amongst the younger players who were experiencing team match play golf for the first time. When he spoke, everyone listened, and the same will be the case at Hazeltine.

“I could not be happier with the way our backroom team is shaping up. To have announced players of the calibre and stature of Thomas Bjorn, Padraig Harrington and Paul Lawrie 10 days ago and now to add Ian Poulter to that mix is tremendous, not just for me personally, but for the whole of Europe.”