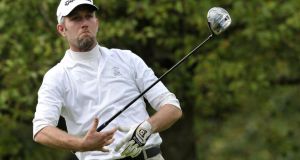 A human tide washed down the 18th fairway from green to tee.

The crowed moved quickly to ensure it would make the putting surface on the 17th to form a human amphitheatre and greet the final match in the Senior Cup final at AIG sponsored, GUI All Ireland Cups and Shields in Royal Tara.

In the less than 10 minutes the nomadic gallery watched Gary McDermott and then Steffan O’Hara win match points for the Co Sligo team that turned a 2-1 deficit into a 3-2 victory against gallant Ulster champions Rosapenna. It guaranteed a fourth Senior Cup green pennant for the Rosses Point club.

O’Hara guaranteed the winning point. But it was Irish international McDermott who facilitated the victory: all square playing the last, he chipped stone dead for a birdie to close out his match against namesake, Martin McDermott. It was a win ground out rather than buffed by excellent shot making.

“It was a poor match . . . I just struggled to get going, it was one of those days,” said Gary McDermott. “I felt if I got my nose in front I would have kicked on but I never did . . . I won eight and nine to get back level but lost 10 and it was a struggle. Birdied 13 to get back to level and I just seemed to kick into gear then. He holed a couple of good putts coming home. It was hard-fought.”

McDermott is the only survivor from the Sligo’s last winning team in 2007. Tom Ford was the captain that time as he was at the weekend and this win was imbued with added poignancy as it marked his last Senior Cup appearance for the club.

“I said at the start of the year that this is my last Senior Cup. For me it is a nice way to sign off . . . There is a good enough nucleus to carry on. I’m happy to sign off and step back.”

Royal Tara has provided a wonderful backdrop to the finals, the layout of the final four holes in particular lending to great matchplay drama. It was in evidence once again as Killorglin stole past Tandragee in another gripping contest to win the Jimmy Bruen Shield final, the perfect way for the Kerry club to celebrate their 21st birthday.

“We came back again, unbelievable stuff. We were down in a lot of the games early on but the boys brought it back in their matches from two down and one down so they did the business,” said jubilant club captain and team member Joe Kennedy.

“This is huge for Killorglin. We’re a club with only 250 members with only 16 players eligible to play in the Bruen, so it’s an absolutely fantastic effort for a small club like us. It’s nice to see the big clubs doing it but it’s extra special to see the small clubs do it and we’re probably as small as they come.

These finals marked another milestone with confirmation that the All-Ireland Cups and Shields will have a permanent home for the next four years (2014-2017) – it will be reviewed after two – at Carton House. GUI general secretary Pat Finn explained the decision: “Originally it was a discussion around the cost of hosting.

“Typically speaking, at a normal venue there’s a requirement to put in a marquee, mobile kitchen, dishwashers and other temporary structures. They could cost anything from €20,000 to €30,0000 and it was felt that to bring it to a venue that’s tailor-made . . . is going to reduce costs to the union.

“In that context, Carton was a pretty obvious choice given the fact that the union is based there. So that was the original logic behind it? Clearly, after two years we’re going to have to review the decision and see is this something we want on a permanent basis. Or will we go back to rotation among clubs in the four provinces.

“Rather than the GUI making that decision, after a couple of years we will poll the clubs that participated, and we’ll poll the clubs that didn’t get to the finals and ask the question (about whether they want to continue with the arrangement) or prefer it when it was rotated. We’ll listen to our clubs in relation to the decision whether to keep it that way or to revert to the rotation.”