Lee Trevino once remarked: ‘Christy flows through the ball like fine wine’ 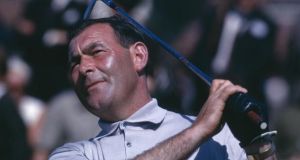 Christy O’Connor snr – a legend of Irish golf and golf in general – who has died aged 91. Photograph: Getty

In truth he was Irish golf’s true pioneer, who paved the way for this golden generation. What was it Peter Alliss, the voice of golf on this side of the pond, once said of him? “Himself was a genius . . . . a legend of Irish golf and golf in general.”

A legend, indeed! And the life of Christy O’Connor Senior, who has died at the age of 91, should be remembered and celebrated for, along the journey, he set milestones and established records and all the time did so with that joie de vivre that exulted delight in the art of shaping a golf ball into the wind, which he did with great success on the great fairways of the world.

Affectionately known as “Himself” , this native of Galway - one of a family of five boys and six girls born in the village of Knocknacarra, close to the first green at Galway Golf Club - brought his love of life and the sport of golf beyond the river Shannon to become recognised globally.

He won 24 times on the European Tour, including two British Masters, and topped the tour’s Order of Merit on two occasions, whilst also showing his prowess in playing on 10 Ryder Cup teams and famously winning the Canada Cup (subsequently the World Cup) with his great friend Harry Bradshaw. He was inducted into the “World Golf Hall of Fame” in 2009.

And, through it all, he retained a long association with The Royal Dublin Golf Club on Bull Island, where, until the past year, he could be found hitting wedge shots on the back service road away from prying eyes.

“His swing was one of the most natural I have ever seen,” the late Seve Ballesteros once recalled of witnessing O’Connor in the flesh. The legendary Spaniard was not alone in including himself as one of O’Connor’s admirers. On meeting Gary Player at the Masters in Augusta National, his first comment would invariably be: “How is Christy? What a player.”

O’Connor once remarked of why he embarked on golf as a career. “When I eventually turned to golf to try and make a decent living, I knew I was a fair old player. But I never imagined that my life would be all about big tournaments, travelling the world and winning money. There were not enough hours in the day for me to practice my golf. But it was all worthwhile.”

In his trailblazing days as a player, O’Connor left his mark. He won the first four-digit cheque on the European Tour - £1,000 for winning the Swallow Penfold in 1955 - and then claimed the biggest ever first prize in golf when his success in the 1970 John Player Classic brought with it a prize of £24,375.

He never did manage to win a Major championship, although his chances were limited by the fact that he only ever played the British Open. In that oldest of championships, he left his mark without ever lifting a Claret Jug: he played in the Open on 26 occasions, claiming ten top-10 finishes, including a tie for second at Royal Birkdale in 1965.

In once reflecting on never getting to win a Claret Jug, Christy remarked: “Perhaps I tried too hard in the Open. I wanted to win it so badly, and it is really the only disappointment in my career in professional golf.”

I remember visiting Christy in his house in Clontarf ahead of his induction into the Hall of Fame, where he had selected over a hundred artefacts and photos for display in Florida. One of them was in black and white and three men in front of the gallery of spectators seem mesmerised by his swing. The Men? Ballesteros, Bernhard Langer and Lee Trevino.

It was Trevino who once remarked, “Christy flows through the ball like fine wine.”

Another photograph featured Himself playing golf with US President Bill Clinton, who had handwritten a note on the end of the picture.

“Thanking you for a wonderful day, wishing I had your swing!” wrote Clinton. Him and millions of others.His swing was a thing of true beauty.