‘He needs to stop over-analysing and just get back to playing golf. The basic fundamentals’ 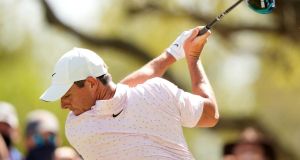 Respected coach Butch Harmon believes Rory McIlroy was wrong to chase the monstrous length being achieved by Bryson DeChambeau and has told the Northern Irishman to stop over-analysing his game.

McIlroy, who this week goes in search of a long-awaited victory at the Masters which would complete his career Grand Slam, admits himself his game was affected trying to replicate the extra-power strategy the reigning US Open champion has employed over the last year.

In an attempt to get back on track – the 31-year-old’s last Major victory was in 2014 – McIlroy has employed another renowned golf guru in Pete Cowen to help him iron out the flaws in his game.

“I was a little bit surprised he said what he said about trying to catch Bryson distance-wise,” said the Sky Sports golf expert.

“It seems to be a trend going around that some of the people are trying to achieve more distance because that seems to be the catchphrase lately.

“Though if you look at players like Dustin Johnson and Jon Rahm and Justin Thomas, these guys at the top of the world ranking, they are long hitters but they are not trying to jump out of their shoes.

“He needs to stop over-analysing and just get back to playing golf. He just needs to go back to the basic fundamentals, to what made him so good in the past.

“Chasing DeChambeau distance-wise was so wrong because he’s already one of the longest hitters in the game, a beautiful driver. I think that kind of got in his head, and affected his golf swing. That hurt him, but if I know Pete he’s getting that out of there.”

McIlroy’s last win anywhere was at the November 2019 WGC-HSBC Champions event in China. And while he has not been playing terribly – he is still 11th in the world rankings – his game is not where it needs to be for him to be adding to his four Major titles.

Harmon believes plain-speaking Yorkshireman Cowen will have a positive effect on McIlroy, although whether it will come quick enough to get him in contention this week remains to be seen.

However, he thinks a course like Augusta National will at least take away some of the thoughts that blasting his way around a course is the route to success.

“Everybody gets wrapped up with distance at Augusta. Yes, if you can drive the ball long and on the fairways, the par-fives get a little shorter, there is no doubt that,” he added.

“But Augusta is a second-shot course. Because of the fact that you never really shoot at a flag,

“If you look at DJ [Johnson], the number one player in the world who won the Masters just a few months ago at 20-under par – he broke the scoring record there – he is a long hitter but he never tried to swing out of his shoes.

“I think that Rory was in a lull, and he really missed Michael Bannon [his long-time coach] because he couldn’t come over to the States and work with him.

“He needed someone to point him in the right direction. I think that’s why he came to see me, to get my opinion, and now he’s trying to get Pete’s opinion and to get his confidence back.

“It’s only going to take one really good round for Rory McIlroy to go out and start playing solidly again. All of a sudden the old Rory will come back, and his confidence will come back.

“Look at the way Jordan Spieth’s starting to play again, because he’s got his confidence back.”

France expected to receive elite athlete’s exemption to travel to Dublin 14:10
Once pain of defeat eases Frampton will be glad it is all over 14:03
Leinster submit detailed plans to Government for safe return of spectators 13:15
‘I shredded everyone’s nerves, I’ll try to win more emphatically next time’ 11:08
Nick McCarthy to re-join Leinster from Munster 10:38
Here is your handy guide to sport on television this week