British Masters to make a return at Woburn this October 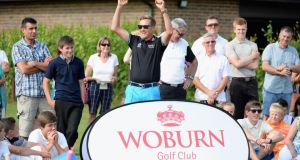 Ian Poulter is delighted that the British Masters will return to the schedule after seven years at Woburn. Photograph: Ross Kinnaird/Getty Images

The European Tour has confirmed that the British Masters will return to the schedule for the first time in seven years in October, with four of Britain’s top players taking turns to host the event.

Ryder Cup stars Ian Poulter, Luke Donald, Justin Rose and Lee Westwood will help to select the venue each year, with Poulter first to assume hosting duties at Woburn from October 8th to the 11th.

Poulter, who has a long association with Woburn, said: “It is fantastic news that the British Masters is back on The European Tour schedule and I am proud and delighted to be bringing the tournament to Woburn Golf Club, which is obviously a place that means a great deal to me.

“British golf has been in a good place for a number of years now with the success we have had internationally, and as players we have all been keen to get more tournaments on British soil, and in England in particular, so we are grateful to Sky Sports and The European Tour for helping to make this happen.

“As a young boy I dreamed of becoming a professional golfer, and being able to watch my heroes play the game inspired me to chase these dreams. I am now passionate myself about encouraging young people to try to enjoy this game that I love so much.

“I know Woburn is going to be a great venue for a European Tour event having hosted the British Masters previously, and I’m sure the fans will come out and really support the event again.

“The British Masters was always one of our leading events and I have some great memories of my battle with Justin at Woburn back in 2002. He’s obviously a good friend of mine and a great competitor, so it was a pleasure to go up against him at my home course. Hopefully I can put my local knowledge to good use once more and be up there challenging again this year.”

It will be the 17th time that Woburn has hosted the British Masters and the first since 2002, when Poulter and Rose battled it out for the title, with Rose winning by a shot after a closing 65.

This year’s event will be staged on the Marquess course and have a prize fund of £3million.