Branden Grace claims second title of the season in Qatar 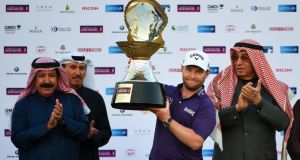 South Africa’s Branden Grace won his sixth European Tour title and second of this season as he finished one shot clear of Scotland’s Marc Warren at the Commercial Bank Qatar Masters in Doha.

Grace carded a decisive eagle on the par-four 16th after a drive to five feet as he carded a six-under 66 final round to finish on 19 under par.

Warren returned to the clubhouse with a second successive round of 67 which included eight birdies, a bogey and a double bogey on the eighth hole.

“It was a great day, a great week, and it’s another trophy to put in the cupboard,” Grace told europeantour.com.

“I’m going to thank Callaway again – that driver again on 16 to four feet; without that it wouldn’t be possible.”

That shot on the 16th followed a snap-hook wedge from the trees on the fifth hole on Saturday, with the birdie earned paving the way to a third round score of 68 for the South African.

Speaking about that shot, Grace said: “That wedge on the fifth hole, that was a shot that you want to hit but you don’t always manage it.

“The form has been there, I played great and I managed to get in on top.”

The win in Doha is Grace’s second of the 2015 Race to Dubai after he won the Alfred Dunhill Championship in December.

World number two Henrik Stenson finished down the field in a six-way tie for 13th on 10 under par with England’s Justin Rose and Belgium’s Nicolas Colsaerts.

Peter Lawrie carded a second-straight 73 to finish on four under, while Michael Hoey finished the week a shot further back after a closing 71.