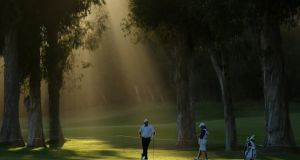 Lee Westwood waits to play a tee shot in the second round of the Northern Trust Open. Photograph: Jeff Gross/Getty Images

Sang-Moon Bae is hoping to learn from his mistakes after reaching the halfway stage of the Northern Trust Open with a one-shot lead.

The 27-year-old led the way going into the weekend at the same tournament last year, only to blow up during his third round.

He is determined to right that wrong, though, after a bogey-free five-under 66 put him ahead of the pack on Friday.

“It was really, really good experience, and I learned a lot,” Bae said .

“I improved a lot from last year.”

He leads Aaron Baddeley and Robert Garrigus by a shot on nine under, with Baddeley going for a first Tour win since winning this tournament in 2011.

The Australian was in danger of being an also-ran in 2014 until he found some form on the back nine, birdying six of the holes including four in a row to the finish.

Charlie Beljan is fourth on the ladder on seven under, with first-night leader Dustin Johnson one of four players on six under. Johnson struggled to repeat this Thursday form and signed for a one-under 70.

England’s Lee Westwood is three under in his first tournament since parting company with coach Sean Foley, with compatriot Ian Poulter just surviving for Saturday and Sunday after a one-under round left him level.

Padraig Harrington failed to make the weekend, though, as did Louis Oosthuizen.

Harrington had been chasing an elusive tour win to boost his chances of making it into the WGC Cadillac Championship next month but instead comes away empty handed and is likely to slip further down the world rankings when they are updated on Monday.

Darren Clarke did not appear on Friday because of a chest injury.