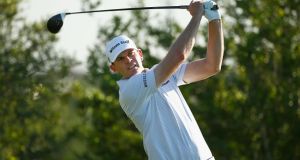 Brendan Steele moved into a two-shot lead before the first round of the Valero Texas Open was suspended due to darkness.

Steele was eight under par after 13 holes, good enough to put him two clear of clubhouse leader Charley Hoffman and three clear of both Stuart Appleby and Peter Malnati, who were also able to finish their rounds.

Pádraig Harrington lies six off the hot pace set by Steele after a tidy opening round of 70.

Play had been delayed for more than three hours by wet weather in the San Antonio area, and while making up for lost time Steele did an outstanding job in making up ground on the clubhouse leaders.

Starting on the back nine, Steele — whose only PGA Tour victory came in this tournament in 2011 — birdied the first three holes he played before picking up a further shot on the 14th.

He made the turn in 31 after a birdie on the 18th — the first of four in a row that moved him to eight under before the lights went out.

Hoffman had seven birdies in his round of 66, but dropped a shot on the 17th after missing a putt from seven foot for par.

That meant he finished only one shot clear of Appleby and Malnati, who each found their own way to put the pressure on as they went round in 67.

For Appleby it was a run of five straight birdies from the 14th to the 18th to finish his round, having previously picked up a shot on the second only to give it back on the ninth.

Malnati, meanwhile, starred in the moment of the day when he a 94-yard shot found the hole on the par-four 17th for an eagle.

Among a four-way tie for fifth at four-under, only Steve Flesch was back in the clubhouse, with Brandt Snedeker, Patrick Reed and Freddie Jacobson all needing to finish their opening rounds on Friday.

Luke Donald made it through 14 holes to join a 10-strong group on three under par.

Defending champion Jimmy Walker had a day to forget. He completed his round but may have wished he had not as he signed for a 75, with bogeys on the fourth, sixth, 12th and 15th only partially offset by an birdie two on the seventh.