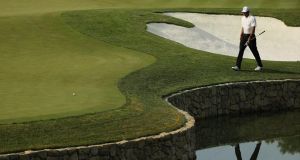 Tiger Woods walks to the 14th green during the first round of the Quicken Loans National at the Robert Trent Jones Golf Club on Thursday. Photo: Patrick Smith/Getty Images

Tiger Woods carded four consecutive birdies on his back nine to finish with a 68 in the opening round of the Quicken Loans Championship, where he looked to show flashes of his best after a poor start to his round.

The 2009 and 2012 champion looked on course to continue the miserable form he has been displaying in recent months after slipping to three over in his first four holes.

But Woods, who missed consecutive cuts in major championships for the first time in his career in the US Open and Open Championship, arrested the slide by picking up a shot on the fifth before delighting the Virginia crowd with four straight birdies after the turn.

He was unable to continue the momentum as he closed with five straight pars to go into the second round at three under par.

England’s Justin Rose began the defence of his title with a compelling five-under-par 66 in Virginia.

Rose, champion in 2010 and 2014, made eight birdies and three bogeys, the last of which came on his final hole of the day, to sit three shots behind joint leaders Retief Goosen and Ryo Ishikawa.

The 2013 US Open champion bogeyed the second but bounced back with a hat-trick of birdies and picked up another two shots before the turn then added another on the 10th to ignite his charge up the leaderboard.

Rose’s struggles to get out of a bunker on the 12th saw him drop back, and although successive birdies at the 14th and 15th put him within two of the leaders he then three-putted at the 18th to sit in a tie for 10th, alongside compatriot Greg Owens with another Englishman Andy Sullivan one shot better off.

Veteran South African Goosen, two-time winner of the US Open, has not won a PGA Tour event since 2009 but made an unblemished eight under par to sit joint top of the leaderboard.

Ishikawa ended his round with five consecutive birdies to join Goosen although the highlight of the Japanese’s round came at the 178-yard fourth, which he aced for the second hole in one of his career, the first of which came at the 2013 Puerto Rico Open.

Rickie Fowler also found the pin on the par-three 200-yard ninth with his tee shot, ending his round of 67 with a flourish.

“Made a great swing,” said Fowler on the PGA Tour website. “Spun to the right; I was trying to cut it. Rolled in with perfect speed.”