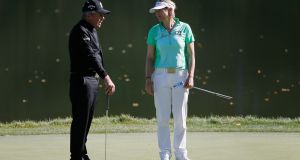 An unrepentant Annika Sörenstam has defended her right to receive the American presidential medal of freedom from Donald Trump in a ceremony held a day after the riotous mobs invaded the US Capitol.

Sörenstam and Gary Player were afforded recognition, with the former’s appearance especially controversial given her recent appointment as the president of the International Golf Federation.

That body, responsible for golf at the Olympics and Paralympics, has a stated aim of securing the “enjoyment of the rights and freedoms among its competitions and members without discrimination of any kind, such as race, colour, gender, sexual orientation, language, religion, political or other opinion, national or social origin, property, birth or other status.” Sörenstam claims to have had “overwhelming support” from the IGF.

Speaking from Florida, where Sörenstam will compete on the LPGA Tour this weekend, the 50-year-old offered no apology for her January 7th White House visit.

“I have always viewed it [the medal] in the context of the people through history who have received it,” she told Golf Channel. “It started in 1963 and it’s quite the impressive list of people; whether that’s through science, art, entertainment or sport. It’s really about people that make this world a better place.

Within days of the Capitol incidents, which resulted in the deaths of five people, the PGA of America removed their 2022 Major championship from Trump-owned Bedminster.

Sörenstam added: “I share the sadness and the fear with everyone. What happened at the Capitol was a dark day in America’s history.”

Pressed on whether she would have handled anything differently, Sörenstam said: “Again, looking back, I don’t second-guess. I like to look forward and not spend energy on what could have been. It’s all about opening doors. I’ve heard from a lot of people. As you can imagine, a lot of opinions, a lot of comments and I hear clearly what those people say. I know they see it differently. I listen and embrace them all. It’s really important to listen.” – Guardian