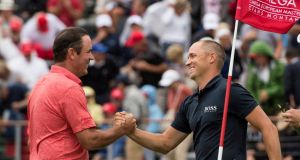 Sweden’s Alex Noren believes he is playing the best golf of his career after defeating Scott Hend in a play-off to win the Omega European Masters for the second time.

Noren birdied the first extra hole from 25 feet at Crans-sur-Sierre to claim his second European Tour title of the season and sixth of his career after he and overnight leader Hend had finished tied on 17 under par.

England’s Andrew Johnston was three shots behind in third after a back nine of 30 in his 65, with Lee Westwood two strokes further back after a flawless closing 63.

Aided by a brilliant front nine of 30 which included four birdies in a row, 2009 champion Noren led by two shots with four holes to play, only to three-putt the 17th from long range after Hend had birdied the 15th.

It was advantage Noren on the last when he split the fairway after Hend hooked his tee shot into the trees, but the 43-year-old Australian took on the brave recovery shot and was rewarded when his approach pitched 10 yards short of the green and bounced over the water — just as Noren’s had done on Saturday.

Hend got up and down from the back of the green for a closing 66 and when Noren had to settle for a 65 after missing a long birdie attempt, the pair returned to the 18th for the first hole of sudden death.

After again hooking his drive into the trees but seeing the ball bounce across the fairway, Hend only just cleared the water with his approach before chipping to five feet, but Noren made certain of the win by holing his long birdie attempt.

“It feels unbelievable,” said the 34-year-old Noren, who won the Scottish Open in July and will climb to a career-high world ranking inside the top 30. “(I was) coming off a three-week vacation and trying to get the game in shape and it got in shape quickly — it’s fantastic.

“I’ve never won coming from behind and never won a play-off on the European Tour and it feels even more amazing. I never thought it would be this good of a year. I took some time off after we had a baby, it’s great to have the family with me here to celebrate.”

Asked if he was playing the best golf of his career, Noren added on Sky Sports: “Yeah, I feel that way. I worked quite hard this season and tried to really play more golf when I’ve been off and not do so much practice on the driving range. I feel steadier with my driver, which has never been my good side.”

Hend, who won in Thailand earlier this season, was phlegmatic about the dramatic finish, telling European Tour Radio: “I think Alex played the 18th hole the last two times way better than I played it obviously and holed an awesome putt to make a birdie, so it’s well and truly deserved.

“I just didn’t play quite well enough. You can’t complain when you get yourself in position in a play-off and someone makes a great birdie.”

Westwood, who was given a Ryder Cup wild card by European captain Darren Clarke on Tuesday, recorded seven birdies to surge through the field, but added: “It was a nice round of golf with a couple of missed putts in there as well and I didn’t birdie 14 going in with eight iron, so it could have been a 60 really.”

There was more good news for Clarke with two more of his team — Matt Fitzpatrick and defending champion Danny Willett — both shooting 64 to finish joint seventh and 12th respectively, with Fitzpatrick having only made the cut on the mark of level par with four birdies in his last five holes on Friday.

Meadow and Maguire make strong starts in Hawaii 06:59
Man City are ‘building history’ with potential quadruple 06:43
Real Madrid defeat is story of Liverpool’s season, says Klopp 06:35
Double-headers and late evening throw-ins off the cards for this year’s Allianz Leagues 07:11
Fiona Coghlan says quarantine ‘would be incredibly tough’ on Ireland 07:10
Here is your handy guide to sport on television this week