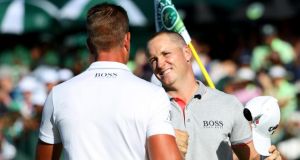 Alex Noren of Sweden is congratulated by compatriot Henrik Stenson after his victory in Sun City. Photograph: Getty

Sweden’s Alex Noren claimed an incredible fourth European Tour title in his past 11 events with a stunning final round in the Nedbank Golf Challenge.

Ranked 108th in the world after missing the cut in June’s US Open, Noren will be inside the top 10 for the first time when the standings are updated on Monday after adding the Nedbank title to victories in the Scottish Open, European Masters and British Masters.

The 34-year-old birdied the first three holes at the Gary Player Country Club and picked up further shots on the fifth, seventh and eighth to reach the turn in 30.

And when he holed from 25 feet for an eagle on the 10th and chipped in for a birdie on the next, the first 59 in European Tour history was a distinct possibility.

A bogey on the 14th put paid to that and Wang’s birdie on the same hole cut his deficit to two shots, only for the 21-year-old to bogey the next two holes as Noren birdied the 16th.

Wang, who was just 20 when he became the youngest player in European Tour history to win consecutive events earlier this season, also bogeyed the 18th but held on to second place, a shot ahead of Andy Sullivan, Branden Grace, Ricardo Gouveia, Alejandro Canizares and Victor Dubuisson.

Open champion Henrik Stenson was a shot further back in eighth to slightly increase his lead in the Race to Dubai over Danny Willett, who finished tied 11th after a closing 69.