Getting done and being seen to be done 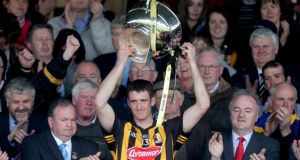 Former Wexford manager Liam Griffin was right when he said that the move to change – yet again – the National Hurling League format was “a sour end” to a terrific season.

The sourness has been caused by a recurrent problem within the game: a strong perception that some counties are treated better than others.

Even in the midst of last month’s All-Ireland epic – just after his team had benefited from some permissive time keeping – Clare manager David Fitzgerald found evidence of oppression.

“We’re the small fish out there trying to make a breakthrough. It’s harder to get the breaks when you’re the smaller fish.”

Next Saturday the GAA’s Central Council will discuss a proposal from the association’s Central Competitions Control Committee to change Division One of the National Hurling League from two six-team sections into a top division with eight and the second with six.

There are all sorts of reasons for this: the inducted counties, Cork and Limerick are respectively All-Ireland finalists and Munster champions and won’t be out of place and there will be more gate receipts for the these elite counties.

Best way
The only problem is that it’s not what was agreed at the end of last year and then vigorously and cogently defended by Croke Park as the best way forward. Then during the summer the status of the lower division jumped when two counties who had played there during the spring won their provincial championships.

The counties seen to be the big losers in all of this are Offaly and Wexford, counties that have at times in their history swum fearlessly with sharks but at present would be categorised in Fitzgerald’s fish tank.

Others adversely affected are Laois and Antrim, who thought that they would be mixing it in more demanding company next season and had presumably hoped to improve their hurling as a result.

For Carlow and Westmeath who have been beneficiaries of the reformatting (whereas it mightn’t be akin to Groucho Marx’s objection to any club that would have him as a member) it’s pretty much getting into a club after the door policy has been relaxed and the most interesting people have left.

In the past five years Offaly, Wexford, Clare, Limerick and Dublin have all had to cope with the loss of their top-flight status. They have had their complaints, especially Limerick who won promotion only to have a redrawing take place in the close season, and Wexford, who stayed up the same year and found themselves effectively relegated in the committee room.

Last week’s announcement about the hurling league format predictably caused outrage in Offaly and Wexford and made a prophet of the Limerick county committee delegate, who cynically predicted last April that the county’s failure to get promoted wouldn’t matter if Cork got relegated because the league would be revamped.

One disgruntled Offaly man said about the proposal: “Last year was agreed to be a great league. The first division was incredibly competitive and so was Division One B. Since then we’ve had an incredible championship. The only thing that’s happened since last season is that Cork were relegated.”

That doesn’t appear to be fair. Cork manager Jimmy Barry-Murphy was philosophical about relegation after last April’s play-off against Clare and Croke Park are adamant that Cork made no representations outside of the recent meetings of hurling counties to review progress on the national hurling development plan.

Even then the county is believed to have argued from the perspective of the good of the league rather than their own self-interest and there was plenty of support.

Kilkenny, for instance, have been unhappy at the reduced financial possibilities of a smaller Division One A in which last season as All-Ireland champions they had just two home matches.

“It’s very pleasing that this change has come about,” he said. “It’s not a surprise to hear about it because the main hurling counties would have had meetings over the past while on this subject and this proposal is, we feel, the best solution.

“It gives the top teams seven games each and those games will help them ahead of the championship.”

The problem here, though, is that Cork are not by last season’s league definition a “top team”. They were relegated. Limerick’s original demotion might have been unjust but the county has failed over the past two years to win its way back to the top division.

Regardless of whatever motivated the change though, is it a good idea or is it fair?

“It’s incorporating the principle of ‘win your way up’. We felt that over a period of time it would lead to teams getting stronger and putting in the work, doing the development, eventually being rewarded.”

It’s an admirable principle in championship.

Why shouldn’t it apply to the league?

1 Six Nations: Ireland are contenders but England still the team to beat
2 In Donegal Michael Murphy is seen, simply, as a godsend
3 Owen Doyle: Creeping professionalism of schools rugby a threat to the game
4 Liam Cahill uses playing regrets to drive him as Waterford boss
5 Gary Neville in Qatar an exercise in semi-journalism
Real news has value SUBSCRIBE
Here is your handy guide to sport on television this week