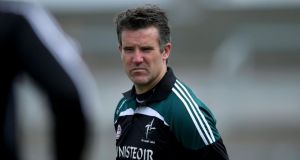 Kildare manager Jason Ryan: he has made several adjustments since the Dublin defeat, with corner forward Niall Kelly and midfielder Tommy Moolick making their returns to the starting 15. Photograph: INPHO

Everything about Kildare football is moving happily forward. At least it is now. That backwards feeling which came with their 19-point defeat to Dublin in the Leinster semi-final has been replaced with victories over Offaly and Longford – and that last one by 19 points.

And now, as they head into tomorrow’s fourth-round qualifier against Cork, there is added strength in depth.

Peter Kelly and Fergal Conway are both back in contention for selection, not that manager Jason Ryan is tempted to make many changes. Kelly did come on for defender Eoin Doyle in the 19-point win over Longford, although Ryan is understandably cautious about tinkering with his selection.

“It is certainly something that we will be toying and thinking about, but any decision we make won’t come lightly, we’ll put a lot of thought into it,” said Ryan, in an interview with the Leinster Leader.

“Peter Kelly being back in contention is a big plus. And Fergal got the all-clear from the consultant and is back in full contention, so he is another big plus for us.”

Kildare also boast one of the best qualifier records of any county (22 wins and nine losses since the qualifiers were introduced in 2001), and the showdown against the beaten Munster finalists sees them bidding to reach the quarter-finals for the sixth time.

Ryan has made several notable adjustments since the Dublin defeat, with corner forward Niall Kelly and midfielder Tommy Moolick making their returns to the starting 15, while debutant Mark Sherry made a big impression when coming off the bench against Longford

“Tommy offers a massive aerial threat there, and he has got a good engine to get up and down the pitch. Niall is a serious play-maker. He is a great footballer. The lads definitely made a big impact there.

“Then Mark Sherry has come on too, and he was a revelation. It is one of the best displays I have seen in a long time from a Kildare player, he was fantastic. Games just seemed to be coming week after week now, but we’re happy that we are building. Hopefully we can just keep on going, game to game focus on the next game, all the time.”

Elsewhere it has been announced that Mick O’Dowd is now in line for another two years as Meath senior football manager after receiving the backing of the management committee of the county board. However, O’Dowd’s name must still go before the club delegates at month’s county board meeting to rubber-stamp that extension until the end of 2017.

O’Dowd’s completed his initial three-year term following the All-Ireland round-two qualifier defeat to Tyrone last Saturday week, yet immediately after that match expressed his wish to continue in the role with Meath. His captain, Donal Keogan, came out in his support.