European soccer conspicuous by its absence from Boston ‘revival meeting’ 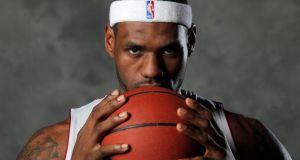 “That’s some unique s**t, man” was supposedly LeBron James’s reaction to being presented with a chart of every shot he had taken over the previous five seasons. Photograph: Hans Deryk/Reuters.

“That’s some unique s**t, man”. That’s what Kirk Goldsberry says basketball great LeBron James told him when presented with a chart of every shot the NBA star had taken over the previous five seasons.

Baseball is widely regarded as a stat-friendly sport but Sloan is truly basketball country. Recently retired NBA player Shane Battier was a big draw. “It was his destiny to be here” said Daryl Morey, general manager of the NBA’s Houston Rockets. Battier was the subject of “The No-Stats All-Star” written by Michael Lewis for the New York Times in 2009, a seminal composition in the sports analytics songbook.

“It was great to see an Irish presence ranging from established companies like Statsports through to an exciting start-up like PocketCoach” said Dr Brian Moore of Sligo-based bioanalytics firm Orreco.

PocketCoach, a personal training app founded by Anthony Walsh and Ciarán Ó Conluain, was one of two Irish entries in Sloan’s Startup Blitz competition. The other? Kitman Labs, featuring former Leinster Rugby strength and conditioning coach Stephen Smith, who have signed Major League Baseball’s Los Angeles Dodgers as their first major US client. Dodgers head trainer Stan Conte said he’s hopeful that along with injury prevention it will help them determine which are the key variables in predicting a player’s decline.

Apart from the major American sports there was analytical work shared in golf, soccer and cricket. European soccer attendance was markedly low. Arsenal, Manchester United, AC Milan and Bayern Munich were there with Liverpool a conspicuous absentee given their shared ownership with the Red Sox. There was nobody from rugby.

“On its face this looks understandable”, said Lynam. But true NFL research at Sloan, for example, is in some ways just as sparse as soccer. Lynam said Sloan is less about panels and more “about the opportunity to meet and share ideas with other like-minded and like-skilled people. There are a huge amount of side meetings going on all the time. It’s a job fair, a brainstorming session and a revival meeting”.

Chris Anderson, co-author of The Numbers Game, Why Everything You Know About Football Is Wrong, mentioned “revival meeting” too. Analytics as religion. Does European soccer simply not believe?

“I think the lack of a European presence can be attributed to the timing of the event, the relative lack of soccer content and the fact that the use of analytics in soccer is still in its infancy,” said ex-FAI man Pádraig Smith, now Sporting Director of Major League Soccer’s Colorado Rapids.

“There is a good chance that Euro attendance was cannibalised by the Opta Pro Forum,” said Devin Pleuler, analytics head of Toronto FC; a sentiment echoed by Anderson. Opta’s February event drew a healthy crowd featuring five attendees from Chelsea alone. November’s Sportdata Performance forum in Berlin had both soccer and rugby presence. For Europeans in midseason each is an easier trip.

For Shane Battier, analytics changed his career and his life. Defensively he said it made him better but “offensively, I lost all my creativity. I really did. I became a player that just shot threes”. The well-drilled team might be effective but perhaps at the expense of spark, of style. Inspiration replaced by dogmatic adherence to percentages – a common complaint from those watching Morey’s Rockets with their slavish adherence to the layup and the corner three.

It’s hard to be overly critical. Morey, like others, hit on a good way to win based on analysing and exploiting the rules. Look at Joe Schmidt’s Ireland. Ruck, kick and contest: wonderfully effective but not pretty on the eye. He might not have been at Sloan but you can be sure Schmidt sings a similar song.